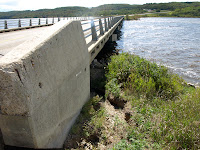 Manitoba Water Stewardship's first spring flood outlook indicates the 2011 spring flood potential is high for much of Manitoba including the Red, Souris, Pembina, Assiniboine, Winnipeg, Saskatchewan and Fisher rivers and the Interlake.  High river flows, above-normal snow-water content in the snowpack, and an expected cooler and wetter spring have increased the probabilities of significant flooding. 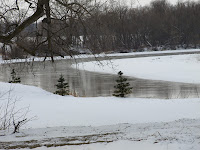 However, the spring flood potential is still very dependent on weather conditions from now through to the spring melt.  The amount of additional snow and rain, plus the timing and rate of the spring thaw and the timing of peak flows in Manitoba as well as other states and provinces will have a significant effect on the flood potential.

Localized overland flooding is expected in most of central and southern Manitoba and could occur during the early part of the run-off period due to ice jams, snow blockages or frozen culverts in river channels, drains and ditches.

*     Precipitation during the autumn of 2010 was heavy and well above normal in most of Manitoba, central and southern Saskatchewan, North Dakota and Minnesota.

*     Cold temperatures from mid-November 2010, through today have resulted in significant soil-frost penetration in most areas.

*     Currently, a moderate La Niña in the equatorial Pacific is expected to continue through the remaining winter months of 2011, which could result in significant snowfall.  The possibility of
significant spring rain due to a predicted El Niño is another concern.  However, if there is a cooler-than-average spring, it might result in a staggered slow melt.

*     An aerial soil moisture survey conducted between Nov. 2 and Nov. 11, 2010, showed that moisture in the top 20 centimetres (7.9 inches) of soil was well above average in much of southern Manitoba.

* Soil-frost information is sparse, but the data available for southern Manitoba and North Dakota suggests the soil is frozen to a depth of 10 to 50 cm (0.3 to 1.6 feet).  Wet, frozen soils do not allow meltwater to soak in and, as a result, increase spring run-off.

*     An airborne snow survey was conducted over the Red, Assiniboine and Souris river watersheds Jan. 4 to 12, 2011.  The survey showed that snow-water content ranged from 50 to 100  millimetres (two to four in.) over most areas of southern Manitoba, which is about 110 per cent of the normal snow-water content.

*     The 2011 spring run-off is expected to be above average over most of Manitoba, south of Gillam.

*     Well-above-average run-off potential is expected over a narrow strip running from The Pas south to Brandon, the Eastern Red River Basin, the Winnipeg River Watershed and the Island Lake area.

*     This prediction is based on 2010 summer and autumn soil moisture, snowpack conditions as of mid-January and average future weather conditions for precipitation, date of breakup and melt rate.

*     The spring flood outlook is classified into three future weather scenarios related to additional snow, melt rates and spring rain.  These scenarios are based on available climate statistics for the past 30 to 40 years.

*     The three future weather scenarios are referred to as favourable, average and unfavourable.

*     Forecasts do not include effects of possible ice jams which are generally unpredictable.  Localized and brief flooding can occur in locations where ice jams develop, even with below-average river flows.

*     Flood outlooks for international and interprovincial streams include information obtained from the U.S. National Weather Service and the Saskatchewan Water Authority.

*     The soil moisture index at 2010 freeze-up is slightly lower than the record-high value prior to the 2009 flood.  However, it is the second highest since such computations began in 1948 and well above the level prior to the 1997 flood.

*     Snow cover is well above average, especially south of Grand Forks but still less than in mid-January 1997.  With unfavourable snowfall from now until spring, the total winter snowpack would remain well below the amount on the ground following the early April blizzard in 1997.

*     With little additional precipitation and a gradual snowmelt, a flood close to that of 2001 is expected.  This would cause only minor overbank flows from St. Jean Baptiste to Morris with
bank-full conditions elsewhere.

*    With average weather from now through April, a flood similar to that of 2009 is expected.

*    Homes in the Red River Valley would not be flooded due to flood protection works.  However, transportation would be significantly disrupted with closure of PTH 75 near Morris and closure of many smaller roads in the flooded area.

*    There is a one-in-10 chance of unfavourable weather.  With unfavourable conditions, peak stages would be comparable to or slightly higher than 1997 levels at most locations.

*    Peak stages from Selkirk to Breezy Point would depend on whether ice jams develop.

*    With favourable weather from now through the spring, flooding would be fairly localized.  This is due to current snow cover being somewhat below average.

*    If average weather conditions occur, significant overbank flows would develop on portions of most streams and there would be overland flooding in low-lying areas.

*    With unfavourable weather, extensive over-bank flows would occur on all streams, bringing them close to 1997 levels.

*    With favourable weather conditions, there is the potential for minor flooding.

*    With average weather conditions, peak water levels along the Pembina River and tributaries would still be somewhat close to those of 1979 but, with unfavourable weather (one-in-10-chance),
flooding could exceed that of 2009.

*    With average weather conditions, flooding would occur at close to 2009 levels.

*    With unfavourable weather conditions, flooding would occur similar to 2002.

*    With favourable weather, there would be minor flooding along the Assiniboine River this spring.

*     If average weather conditions occur, there will be flooding along the Assiniboine River this spring.  The drawdown of Shellmouth Reservoir that is now underway will minimize the risk of flooding while providing sufficient water supplies to meet downstream needs in 2011 and beyond.

Average weather conditions would also result in flooding from Millwood to Brandon with levels generally below those of 1995, but higher than those of 1979. 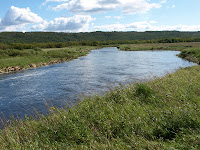 *    Shellmouth Reservoir is being drawn down this winter to provide maximum storage space for spring flood control along the Assiniboine River.  This will greatly reduce spring peak stages along the river, especially for the portion between the dam and St. Lazare, where flooding will be avoided only if favourable weather conditions occur.

*    The Portage Diversion will be operated to prevent ice jams and flooding from Portage la Prairie to Winnipeg.  Flooding could occur in this portion if unfavourable conditions occur. 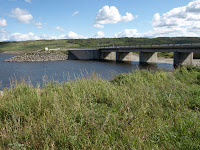 *    Unfavourable weather conditions would result in significant flooding on most tributaries leading to over-bank flows.

*    The flood potential is high for the Souris River due to high soil moisture and higher-than-normal snow cover in the North Dakota portion of the watershed.  Significant flooding of agricultural lands adjacent to the river is likely.

*    A favourable weather scenario would produce a flood similar to that of 2009.

*    With average weather conditions, a flood slightly less than that of 1974 is likely.  Low-lying portions on the south edge of Melita would require diking.

*    Unfavourable weather would result in water levels higher than those of 1974 but lower than the peak stages of the 1976 record flood.  Low-lying homes near Souris would require diking in
addition to the area next to PTH 3 at Melita.

*    With average weather, flooding is likely on Souris River tributaries.

*    Soil moisture is well above normal and most small depressions are relatively full from heavy rains last summer and fall.  Snow cover is currently average to above average.

With favourable weather, flooding would be limited to low agricultural lands.  Streams would remain within their banks.

*    With average weather, flooding would occur and the Fisher River would see flood levels close to those of 2006.  Overland flooding would also occur.

*    With unfavourable weather, flooding (slightly higher than that of 1986 but lower than 2009) could develop.  There could also be difficulties due to a high water table, resulting in seepage into
basements in rural areas.  The Fisher River would have levels similar to the 1986 flood.

*    Record high levels are likely on the Shoal lakes, even with average weather conditions.

*    With favourable weather conditions, localized flooding could occur in areas like the Brokenhead, Whitemouth, Whiteshell and Winnipeg rivers.

*    If average weather conditions develop, flooding is likely to occur along streams and lake shores.

*    Unfavourable weather conditions could produce flooding of agricultural lands that would be close to previous record floods.

The Winnipeg River is expected to be below 1997 but above 1988 levels under unfavourable weather conditions.

Westlake, Dauphin and The Pas Regions

*    With average weather conditions, flooding is possible on the Whitemud, Turtle, Swan and Carrot rivers and the Saskatchewan River would be expected to see flood levels slightly higher than the 2005 flood at The Pas.

*   Run-off in most of far northern Manitoba (north of 54 degrees north) is likely to be average.

Run-off should be more substantial in northeastern Manitoba.

*    This forecast will be updated in late February when further precipitation and weather details are available.