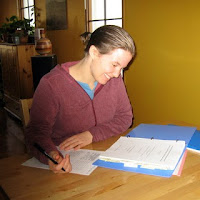 by Larry Powell I'd like to correct several statements in a recent article by Cam Dahl of the Frontier Centre for Public Policy that are either misleading, inaccurate, or both. In it, he insisted that Canada's current system of food regulation is "efficient, science-based and safe." Sadly, history shows something quite different. Almost five years ago, a bright, dedicated young graduate student at the University of Manitoba, Jennifer Magoon, (above)  found statistically significant links between the amount of farm pesticides used in certain regions of this province and the incidence of several health problems in infants. These included severe birth disorders including spina bifida, Down syndrome, cleft palate, lower birth weights, respiratory distress and jaundice. There were eye disorders, too, including retinal degeneration and cataracts. Magoon's findings were based on health records of tens of thousands of people living in rural Manitoba. Her rese
1 comment
Read more
More posts