Of Parrots and Parables. The Silent Majority Must Speak Out.

Family members were excited when a large box arrived at their house. A relative in the tropics had told them to expect a gift in the mail.

A week passed. The phone rang. It was the relative. "How did you like the gift that I sent"?

“We really enjoyed it,” replied a family member. "It was delicious!” 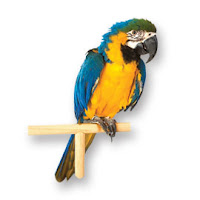 "WHAT?" exclaimed an angry voice. “You ate the parrot? That was a very expensive bird. It could speak both official languages! It wasn't meant to be eaten!”

"Too Bad" replied the family member. “It should have spoken up and said something.”

Like the parrot, have we humans waited too long to speak up, too?


How many more crimes against nature are we prepared to suffer before we, too are consumed, not at the dinner table, but by the greed, cruelty and neglect of our elected governments and non-elected corporations at all levels?

Here are a few of the things they’ve been getting away with for far too long.

They’ve polluted Lake Winnipeg, in my home province of Manitoba to the point where it is now in the running for the “honour” of the most threatened lake in the world! Lakes and rivers right across this country are facing similar fates.

They’ve also issued a license for the removal of still more water from the Little Saskatchewan River for irrigation purposes, without proper studies or consideration of conservation measures.

Mining companies are dumping tailings into our lakes for their own economic benefit.

Apparently suffering from the dreaded “out of sight, out of mind” syndrome, they’re also dumping arsenic back into our water sources, just to get rid of it!

Despite the latest federal research proving that the Tar Sands are polluting surrounding lakes in Alberta, they’re prepared to continue to inflict this, along with a multitude of other consequences from the related Northern Gateway pipeline upon us.

They continue to use sow stalls in Intensive Hog Operations, despite the public outcry that they be banned.

If Manitoba’s Minister of Agriculture, Ron Kostyshyn means what he says (that "morally the province doesn't agree with sow stalls") why are they still in use? Quit stalling Mr. Minister! Do what needs to be done!

After all, the waste they’ve now accumulated might as well be called "The Manure pile of Modern Civilization."
They’ve slashed funding for the EXperimental Lakes Area, leaving the impression that water research itself is of no great importance.

Ottawa isn’t even trying to fight the unrelenting rise in greenhouse gas emissions and the effect they are undeniably having on the worsening of catastrophic global warming.

We in North Americans alone, will need five planets, the size of earth, to cope with this.

In a recent survey, Canada ranked 58th in the Climate Change Performance Index.

Facts like these fail to impress, or even get the attention of our present governments.

This is extremely disappointing, even shameful, wouldn’t you say?.

Is this really necessary?  Do governments have to literally destroy every single resource that our earth has to offer?

Do they not have any concerns for what they are doing during “their" time on Earth, ravaging it’s resources to the fullest?

This should be a flourishing Earth that can nurture future generations and all creation.

This constant greed will leave a shameful footprint that mankind will be unable to erase.

The message is very clear and simple: People. You, me, and others have to begin speaking out to get the needed action and changes, to protect and save our water sources, the air we breathe, and the environment;…. all of which are the living earth.

That is the situation that we are faced with today; Fighting for a better future. But sadly, we are losing ground. We have sacrificed too much in order to secure the riches of life.

Forests have been ravaged. Much of our clean water has been lost and we have cut up and sold the world itself. Our finite resources go to the highest bidder.

We must confront corporate greed. We must stop the pollution and plunder.

Governments must be brought to task, for they squander what we all need to survive on this earth. They glorify and elevate economics above the very things that keep us alive.

They blindly march in lock-step to the demands of industry, under the guise of sustainable development. It is the corporations that call the shots in today's world, not government.

No one can walk on this earth without leaving an imprint on nature. So we need to tread softly with a gentle and tender step while showing the error of those who do not. Our grandchildren will inherit what we leave. So we need to allow Mother Earth to be able to continue to enrich all the generations that follow us.

And please don't rely on others alone to do this job. All of us have the capability and obligation to contribute something! For nobody makes a greater mistake than those who do nothing.

We must never underestimate our own efforts. While they may not seem like much, all we're asked to do is sow the seeds and they will grow.

For the sake of all humanity and those yet unborn, just think about what happened to the parrot!

We have to speak out and be idle no more.The silent majority have been silent, too long.

With another new year already upon us, this is surely as good a time as any, not to just reflect on the past, but to add our own voices to a hopefully growing, future chorus, calling for a healthier world for all.