I wrote this story almost three years ago. I am re-posting it because a flood similar to the "one-in-300 year-kind" we had in 2011 - in Manitoba - is happening again THREE YEARS LATER! I continue to be struck by how little things change. So-called leaders (and ordinary people) remain in a stupor - an unexplained state of mass delusion and denial - approaching our climate crisis from every direction but a rational one.
A number of scenarios outlined below have now changed, but the general sentiment remains.
============
by Larry Powell

If a shrink were to examine the brains of North America's political leaders, what do you suppose she would find?

What parts of what lobes would be addressing the cataclysmic changes our planet's climate is undergoing?

Are the neurons of these leaders' brains actually transmitting, making them aware that Earth is going through a monumental crisis that needs their immediate attention? Or are they somehow "shorting out," as if each leader was sticking a finger in a light socket?

Here are just a few examples of what I mean.


Earth's foremost climatologist, James Hansen recently warned that it will be "game over for the climate" if the Keystone XL pipeline, planned to carry massive amounts of dirty, corrosive, dangerous tar from Alberta to the Texas Gulf Coast, goes ahead.

A group of Nobel laureates even got into the act, calling for a halt to the project.

In a sane world where science is respected, the obvious response would be, "No thank you. That's just lunacy!"

Yet, in the wacky world of politics, *President Obama actually seems poised to approve the scheme! If he does, he will surely be writing the final chapter in a book of betrayal in which he spits in the faces of all the progressive, caring people who once formed his "base." Many worked hard to actually get him elected in the first place, based on his pledge to help build a cleaner, greener world, less dependent on fossil fuels!

Before taking office, Obama promised to reverse Washington's lack of leadership in fighting climate change, a problem he described as urgent!  Far from fulfilling that lofty promise, he now appears quite prepared, not just to dash the hopes of his political faithful, but to let the tar sands genie out of the bottle and into the lungs of a planet already under siege.

As President Obama becomes increasingly obsessed with appeasing Republicans, Tea-Partiers and the religious right in their crusade to degrade Mother Earth herself, Canada, sadly is rushing in to prey on that weakness.

Prime Minister Stephen Harper's "operatives," are busy at work, behind the scenes, lobbying to have the President and his fellow Democrats weaken what resolve they have left to  protect America's air, water and soil.

Acclaimed as an environmentalist when he was Premier of Manitoba (he liked to pose for photo opportunities with Arnold Schwarzenegger), Doer (now Harper's Ambassador to the US),  is selling the Keystone Pipeline with all he's got. In an interview with Canadian Press, Doer actually implies the President would be playing politics, if he rejects it!

(Perhaps you should look into a mirror before making such a suggestion, Mr. Ambassador!)

Meanwhile, back In Canada, we are seeing examples of behaviour on this issue which range from deceptive, at best, to corrupt, at worst. A former Canadian Ambassador to the US, Derek Burney, ranted in an interview on CBC Radio this summer against environmental groups opposed to the pipeline as being "emotional," even "violent!" He conveniently neglected to inform the CBC he is a Director of Trans Canada Pipelines, builders of the project! (The CBC later apologized for the oversight, after I personally complained to the Corporation's ombudsman about it.)

Wallin is an un-elected member of the Canadian Senate, appointed by Stephen Harper. She was in the forefront in media interviews earlier this year, defending the Senate's move to defeat the "Climate Accountability Act," duly passed in a minority House of Commons (which would have set targets for greenhouse gas emissions), without so much as a debate. It turns out, she, too is an officer in a company exploring for tar in Saskatchewan! This outrageous conflict of interest has prompted formation of a Facebook page, "Canadians Demanding the Resignation of Pamela Wallin."

Is the Climate Crisis Somehow Different in Canada? Not Really

Another of the world's top climatologists, Andrew Weaver (a senior author with the Nobel-prize-winning Intergovernmental Panel on Climate Change) from the University of Victoria, told the CBC recently, "While climate change can't be blamed for specific events, the general trend is now unmistakable." Weaver warns, severe weather, including floods, once considered "100-year events," will  become more common. 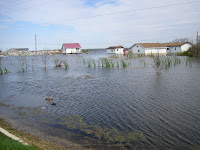 Here in Manitoba, my own province, catastrophic floods have, indeed become more frequent in recent decades.

Cabins on Lake Manitoba.
This flood has lasted for 3
seasons now - agonizingly
long for the people who
once lived or vacationed
here. (PLT photo).

The flooding this year, 2011, is being officially described as "unprecedented,"in terms of physical size, crop losses and duration and damage to infrastructure. Hundreds of homeowners, cabin owners, fruit, vegetable and cattle producers have lost their homes, vacation places, pasture for their herds, millions of hectares of valuable food crops and in some cases, even livelihoods. Several months after floodwaters forced evacuation of their reserve, hundreds of First Nations people are still being put up in hotels in Winnipeg.  Now "environmental refugees," they face little hope of returning to the lives they once knew, hundreds of kilometres away.

The dollar cost of "the floods of 2011" in terms of government compensation, will undoubtedly run into the billions, probably a record amount.  In terms of both the depth and duration of human misery - that cost is immeasurable. (So much for the argument that it would be too high a cost to the economy to fight climate change!)

Yet, the role which climate change has almost certainly played in all of this, has gone without a mention in the campaign now underway, leading up to the provincial election here in Manitoba on October 4th!

Political discourse has been confined to the effectiveness or otherwise of flood control dams and diversion ditches. The government's main  response has been to dig a $100 million dollar ditch to relieve high water levels on Lake Manitoba.

If this had just been part of a broader, co-ordinated attack, including an assault on greenhouse gas levels, such a response might be more rational. As a stand-alone measure, it once again points out the bankruptcy of ideas in the halls of power and a total inability to "get" the complexity of global warming.

Admittedly, Manitoba is a small jurisdiction in the overall scheme of things.

But leadership must begin somewhere. Why not here?

Manitoba - Just a Microcosm of a Worldwide Crisis

Earth is now rushing down an unknown path. Catastrophic droughts, wildfires, floods, blizzards, hurricanes, typhoons, tornadoes, vanishing ice-caps and glaciers, rising sea levels and heat waves, almost certainly being fuelled by man-made climate change, are becoming "the new normal."  Yet the people we elect to lead us, are nowhere to be found.

The warnings of climate scientists, now decades old, are coming true, one by one. Yet those leaders who should be "at the helm," steering us on a different path, are missing in action - **like rats from a sinking ship.

As record floods on the Canadian prairies and drought in the horn of Africa deprive millions of needed food - just as the science has foretold - our Prime Minister, Stephen Harper, is off to exotic places signing free-trade agreements or in our melting Arctic, tilting at imaginary enemies and the need for more military muscle to assert our "sovereignty." (And, of course - now that Mother Earth is being laid bare of snow and ice, the Canadian Arctic is "open for business! Send in those machines to extract the rest of the oil, gas  and minerals which lie beneath.) This approach will surely do nothing but worsen the climate tragedy we are watching unfold before our very eyes.

And what are we to make of all of this puzzling behaviour? Two things come to mind.

Start listening to the science.

And stay away from light sockets!
======
Since I wrote this story, the Obama administration has taken steps to limit greenhouse gas emissions, both in the field of coal production and through vehicle emission standards. Such emissions have actually been going down there for a few years, as a result. Sadly, not so in most of Canada, however.

** And, if exceptions can prove the rule, the province of British Columbia, which introduced a carbon tax in 2008, reports greenhouse gas emissions have decreased 2-5 % since then (although the government itself admits, complicating factors such as the worldwide recession of 2008), means those figures ought to be treated with caution.
And regulations in California made definite improvements in pollution and GHG emissions, as well. These "exceptions," however, are way too rare.

John Fefchak said...
BRAVO to you PLT, for providing this excellent read.

The once in every 300 years has been reclassified to
ONCE every third year.

Surprising how many people still refuse to accept climate change and treat it in an Oh…Oh..Hum manner, when it is discussed.