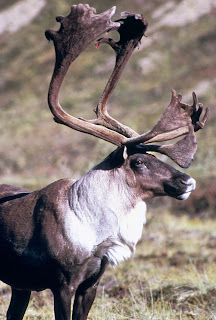 Antlers of the barren ground caribou can be a meter tall.  The majestic animals have traditionally provided food for subsistence hunters .  A Wikimedia Commons photo.   According to the magazine Science, US politicians may be about to put the continent’s biggest and healthiest caribou herd at risk. That’s because a US Senate committee has just voted to allow drilling for oil in Alaska’s Arctic National Wildlife Refuge. The coastal plain region of the sprawling refuge happens to be the calving grounds for the Porcupine caribou herd. The Arctic National Wildlife Refuge. Photo credit -  US Fish & Wildlife Service. Republicans supporting drilling say its footprint will be small. Environmental groups disagree, saying roads and pipelines will dissect the animals' habitat.  A Canadian wildlife ecologist quoted in the story, Chris Johnson of the University of Northern BC (Prince George), says the consensus that industrial activity disturbs the animals is
1 comment
Read more
More posts