CBC news UBC researchers found BMAA toxin in high concentrations in 25% of algal blooms tested in Manitoba lake. Story here. Lake Winnipeg. Greenpeace photo. A FOOTNOTE: In the interests of fairness and accuracy, it should be pointed out that it was Eva Pip, a long-time water expert at the University of Winnipeg, and a colleague who are on the record as first confirming BMAA in Lake Winnipeg, NOT the BC research team referenced in the CBC story.   PinP Find Prof. Pip's research here.
1 comment
Read more 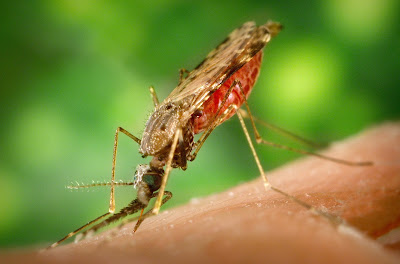 World Health Organization After unprecedented global success in malaria control, progress has stalled, according to the  World malaria report 2017.   There were an estimated 5 million more malaria cases in 2016 than in 2015. Malaria deaths stood at around  445 000, a similar number to the previous year. A female malaria mosquito ( Anopheles albimanus),   feeding on a human host.  Photo Credit: James Gathany, Centers for Disease Control “In recent years, we have made major gains in the fight against malaria,” said Dr Tedros Adhanom Ghebreyesus, Director-General of WHO. “We are now at a turning point. Without urgent action, we risk going backwards, and missing the global malaria targets for 2020 and beyond.” The WHO Global Technical Strategy for Malaria [ii]  calls for reductions of at least 40% in malaria case incidence and mortality rates by the year 2020. According to WHO’s latest malaria report, the world is not on track to reach these critical milestones. A major pro
Post a comment
Read more
More posts