The house fly. Photo by USDA

A veterinarian at the Walcott Veterinary Clinic in Iowa, Grant Allison, captured flies at swine operations which had tested positive for both diseases in Iowa and Minnesota. In his words, "Flies replicate in moist conditions that could involve manure. So there's an intimate relationship between manure and viruses and flies. The idea that flies might be a possible vector was immediately obvious. We came up with a plan and started by finding an outbreak and trapping flies to see if the flies were positive."

Not only were they carrying live viruses for both diseases, they were spreading them to healthy pigs and making them sick. What's more, the flies were even found to be infectious in January, usually considered the off-season for such harmful vectors.

Dr. Allison recommends putting a larvicide in the hog feed as one tool in a program to achieve effective fly-control. He believes an extensive program of spraying or fogging would pose too many dangers to the health and safety of workers.

What he does not mention is using anaerobic digesters (ADs) as a possible means of tackling this very problem. These complex pollution control devices use microbes in the absence of oxygen to break down pathogens in slurry, the liquid waste of hogs. The U.S. Environmental Protection Agency confirms that, not only do ADs drastically reduce offensive slurry odour (making slurry less of an attractant), they "lower pesticide expenses because of reduced fly hatching."

Trouble is, at the behest of the hog industry that ADs are too expensive, the Manitoba Government last year removed a requirement that they be built along with any new barns. As a result, there is said to be not a single AD in operation anywhere in the province. And it's not believed there are any plans for any in the future, either.

Meanwhile, PEDv has ravaged Manitoba's hog population since a serious outbreak began over a year ago. While mortalities, especially among piglets, were obviously high, the industry won't give numbers. And the province says it doesn't know, because it doesn't keep track.

The U.S. study was published in "Farm Journal's Pork" earlier this year.

MY LETTER TO THE EDITOR.
Dear Editor,

I do believe the factory hog industry in this province has become its own worst enemy.

I was just reading the other day that it has now been scientifically proven that the common house fly can and does, spread serious hog diseases,
from pig manure to healthy animals. And yes, these diseases include “PED,” Porcine Epidemic Diarrhea. PED has been rampant among Manitoba’s
swine herds for over a year now. It’s fatal to almost all piglets who get the virus. They die a horrible death due to dehydration, vomiting and diarrhea
within days of birth.

Mortalities have no doubt been high. Just how high? We "ordinary" citizens may likely never know. That’s because “Manitoba Pork,” the mouthpiece
for the industry here, won’t say. And the government doesn’t know, because it doesn’t even keep track!

Other losses? Common sense would say they must be high, as well, in both dollar (economic) terms and the sheer, immoral and unnecessary waste of both live, sentient beings and what the industry would call, its "product," pork.

Even though we, the taxpayers frequently subsidize this industry, we are not considered important enough to be made privy to this kind of
information.

Meanwhile, this "profit-conscience" industry stubbornly refuses to join the 21st century by installing state-of-the-art pollution controls. These
controls, called “anaerobic digesters,” are used in several places (except Manitoba). According to the EPA in the States, not only do they drastically
reduce the toxicity of “slurry” (hog poop mixed with water and then spread over vast fields of food crops)) but, because of a corresponding reduction
in the stench, the incidence of fly-hatchings, too!

But, since our current, “corporate-friendly” provincial government no longer requires such digesters, the industry is, of course, not installing them.
(So much for “good corporate citizens” voluntarily “doing the right thing.”) Has anyone heard of any owners who’ll be installing them along with the scores of new barns now going up, as we speak? Because I haven’t!

A veteran “hog watcher” I know in this province can recall, back in the days of the Filmon government, when concerns about the role of flies in spreading diseases were raised, they were dismissed by both government and industry, as “fear-mongering.” Reminds me of the fairy-tale about the boy who cried wolf. Except, this time, there is a wolf and no one gives a damn. And, as long as we keep electing governments who invariably choose narrow economic interests over science and the health of their own people, nothing will change.

I'd like to leave you with this quote from Joel Salatin, a farmer and author. "This magical, marvellous food on our plate, this sustenance we absorb, has a story to tell. It has a journey. It leaves a footprint. It leaves a legacy. To eat with reckless abandon, without conscience, without knowledge; folks, this ain’t normal.”

Larry Powell lives in Shoal Lake, where he publishes www.PlanetInPeril.ca. 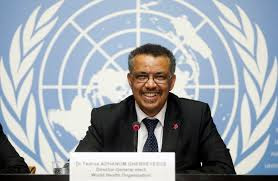