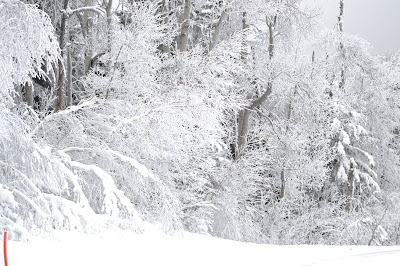 Hoar frost coats trees of the boreal forest in Manitoba, Canada.
A PinP photo.
Researchers conducting a 5-year-long study examining snow cover in a northern hardwood forest region found that projected changes in climate could lead to a 95 percent reduction of deep-insulating snowpack in forest areas across the northeastern United States by the end of the 21st century. The loss of snowpack would likely result in a steep reduction of forests' ability to store climate-changing carbon dioxide and filter pollutants from the air and water. Story here.