Nights Are Warming Faster Than Days. Here’s Why That’s Dangerous.

More bad news for the world’s oceans - out of Canada! 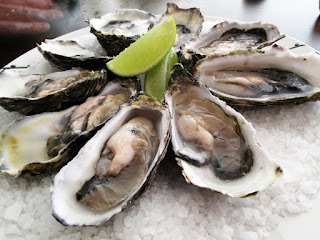 by Larry Powell Pacific oysters - with salt and lime.  By Guido - Flickr . A team of Canadian researchers has found that BC’s premier oyster-growing region off the east coast of Vancouver Island, is “highly contaminated” with micro plastics. The team, from Simon Fraser University, says it is now important to find out if the oysters themselves are ingesting the plastics. If they are, it could have implications for the health and quality of the product itself, Canada’s oyster-farmers, in general and the entire industry, worldwide. The scientists found micro-plastics at all 16 sites sampled within Lambert Channel and Baynes Sound, indicating "widespread contamination of these regions with these particles." That is Canada's prime growing area for the Pacific oyster ( Crassostrea gigas ). It is also feared the microplastics could accumulate trace metals which, in turn, could harm the oysters and other organisms on the sea-bottom.  Dynabeads, a mag
Post a comment
Read more
More posts