SETUP:
A few months ago, the Government of Manitoba invited input from the public on a proposal to expand production of protein-rich food, whether plant or animal-based, in this province. It claims, meeting this fast-growing global demand offers much bigger opportunities than those which have existed before, for both farmers and investors. The province has embarked on a massive expansion of its industrial pork industry by relaxing both health and environmental regulations and obviously hopes through this new initiative,  to make it even bigger.
In this in-depth article, long-time farm activist and livestock producer, Ruth Pryzer, offers many valuable insights into why this all needs to be taken with several grains of salt.
l.p.

The consultation document is short on details and long on rhetoric, particularly in relation to the claim that expansion of protein production being environmentally/ecologically viable, in the public interest and economically sustainable for farmers.
The underlying premise of the goal for Manitoba to become the “preferred protein provider in North America” and increase meat protein processing by 35% by 2025 is desirable and sustainable is unsupportable at many levels if the public interest in a healthy rural economy and a healthy environment are major priorities.
Part of the strategy is to reduce “red-tape.” The Provincial government has started down this road with Bill 34 and Bill 19 to the detriment of long-term environmental sustainability.
These Bills erode the capacity for people to meaningfully participate in decisions about how their communities will develop and erodes people's rights and ability to protect themselves from the agenda of international corporate capital and the industrial food production system. When a government's priorities centre on supporting big business and the industrial model of producing food, the expected results will not be positive for farmers or the public interest.
Bill 19 in particular was designed to reduce and remove the ability for rural people to say no to the expansion of the hog industry and the imposition and placement of large livestock feedlots and confinement facilities in their backyards.
People have a right to the enjoyment and use of their rural property, homes and existing farms, to protect their domestic water supplies from contamination and be free from industrial livestock pollution and negative impacts such as odour, increased traffic, noise, animal diseases that can spread to their non-industrial livestock operations, drug-resistant bacteria and fungi, endocrine disruptors and practices that degrade bird, insect and wildlife populations. Bill 19 further removed control over the planning process from local people in order to meet the desires of industry and large international corporations, not the needs of people.
When I was a municipal councillor, tasked with making development decisions and evaluating conditional use applications for large livestock operations, the fundamental operative principle that guided my decision-making was whether or not a proposed livestock operation would negatively impact the rights and quality of life of folks who had already established a home and farm operation within the area.

Numerous pieces of legislation establish such rights. Some legislation such as The Environment Act and Planning Act purport to provide the means to protect people from pollutants and substances that are detrimental to their quality of life and health. When it comes to industrial hog, cattle, sheep and poultry production, these negative impacts are essentially minimized and dismissed by those administering legislation and regulations. For example, the livestock Technical Review Committee interprets legislation and regulation as they determine and almost always recommend that a proposal should be approved. Unmanageable environmental problems are asserted to be mitigable. I have read hundreds of TRC reports and without exception, real potential environmental problems are minimized. Now, what is built into the government's review structure is the acceptance of proposals that do not have enough spread acres to assimilate phosphorus in manure at annual crop removal rates. Government and the TRC deem a proposed livestock operation to be acceptable if enough spread acres are available at twice the phosphorus crop removal rate.
The Livestock Manure and Mortalities Management Regulation
permits the loading of phosphorus onto land up to 823 lbs/acre of Olsen soil test P205. Made in Manitoba Science and reports from world-renowned scientists such as Andrew Sharpley show that the leaky soil bucket is full when approaching the level where phosphorus starts to be regulated in the LMMMR. When more phosphorus is added approaching or exceeding 276 lbs/acre of soil test P, there is an exponential loss of P to the environment. That is what the science says, yet decisions to allow industrial livestock operations are occurring with no regard for this scientific fact. Soil test or labile P is only 10% of the amount of P that is in the soil at the time the soil test is taken. This is standard curriculum from Alberta soil science university experts. This means that the total P in an acre of soil that can accrue as sanctioned by the LMMMR is 8230lbs/acre. Don Flaten et al in their report to the Clean Environment Commission's review of the hog industry in 2007 reports that the annual average crop removal rate of P in Manitoba is 20.47lbs/acre. This shows that the regulation was designed to facilitate the waste disposal and polluting practices of industrial methods of producing livestock.

The Environment Act defines a pollutant as “ any solid, liquid, gas, smoke, waste, odour, heat, sound, vibration, radiation, or a combination of any of them that is foreign to or in excess of the natural constituents of the environment, and

(a) affects the natural, physical, chemical, or biological quality of the environment, or
(b) is or is likely to be injurious to the health or safety of persons, or injurious or damaging to property or to plant or animal life, or
(c) interferes with or is likely to interfere with the comfort, well being, livelihood or enjoyment of life by a person;
The release of excess P into the environment is evident in the Manitoba aquatic landscape. Increasing numbers of watercourses and water bodies are experiencing eutrophication and negatively impacting aquatic ecosystems. Some water bodies such as Lake Wahtopanah (Rivers Reservoir) on the Little Saskatchewan River are compromised due to toxin producing algal blooms occurring each summer which are fed by excess nutrients, especially phosphorus. This is a public health problem for people recreating on the Lake as well as an environmental problem for wildlife that the Lake sustains. Yet, planners and provincial and municipal staff and government continue to ignore the cumulative impacts of developments and food producing practices that fail to and/or ignore the excess application of P problem sanctioned by the province for the sake of expanding the hog and feedlot protein industry primarily controlled and owned by multinational corporations.
The plant protein strategy will be intimately tied into the government-desired expansion of industrial hog production and the establishment of large feedlots for cattle and sheep. By-products from the protein extraction processing of soy and canola is proposed to be fed to hogs and cattle (as well as sheep and poultry). This presents more environmental and social problems for rural Manitobans. The standard best practice used to be a one in four year rotation for canola production. It has been shortened to two years by most producers. With processing plants for canola and soy it is reasonable to conclude that there will be a greater increase in soy and canola production in Manitoba and further denigration of soils and soil bacterial and fungal ecology, an increase in use of insecticides and other life-killing “crop protection" agents.
Monocultural crop production and factory meat production have been destroying the web-of-life world-wide. This has been proved by scientists all over the world. The assertion that further expansion of these models of producing food (and integrating them further under a protein strategy where the by-products of plant protein extraction can be used as a source of livestock feed for more factory produced pigs and cattle finishing in large feedlots) is environmentally devastating and is not supported by science and historical reality.

The environmental impacts of monocultural cropping of genetically modified soybean and canola are already evident. These crops use neonicotinoids as a crop protection tool. Neonicotinoids contribute to the decline in pollinator populations, critical for the production of open-pollinating crops. Independent entomologists warn that globally we are in danger of an insect apocalypse. Long term studies in insect populations show that there has been a serious decline in global insect populations over the past 30 years. Insects are the foundation of terrestrial ecosystems and species diversity. The recently released United Nations report on biodiversity warns that a billion species, many of whom are insects, are on the verge of extinction. Continued reliance on pesticides to produce plant proteins contributes to this decline. And what is the goal? To denigrate and pollute the Manitoba environment and water sources to produce protein for export. The costs are too high. What will the world look like for our children and grandchildren when there is a wholesale ecosystem collapse for the sake of corporate profits? People who support this protein strategy obviously don't care about what current and future generations of people will have to endure. 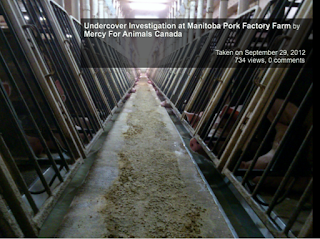 It should also respect the needs of livestock as sentient beings rather than treating them as merely meat/protein commodities on legs.
To be clear, I have deliberately chosen not to provide a list of scientific studies, reports and references. I have made this choice because, it has been my experience in doing so that information that does not fit into or contradicts the corporation supporting beliefs of decision-makers is regularly dismissed, ignored and rejected. The natural systems upon which all life is supported are reaching a tipping point. It is evident that the authors of this protein strategy hold beliefs that are at variance with reality and require a fundamental shift to become aligned with reality.
I lost family during World War 2 who believed that they were protecting the world from anti-democratic and fascist control. What would they say now if they knew that fascism is alive and well in Canada, that the take over of governments by corporate interests has happened, is thriving and the democratic tools for people to protect their individual and collective interests have been further eroded by the party in Manitoba that says they are for advancing small business and protecting the little guy?
What will people living 20 to 30 years from now say about the decision to further industrialize animal and crop production with its commensurate and expected environmental and rural quality of life degradation? Indigenous people on Turtle Island teach that to be regarded as having lived a good life, future generations can regard us with honour for having made decisions to live in concert with nature and in ways that ensure that the web-of-life is protected.
Finally, there is no evidence that there has been any consultation with First Nations, Metis or Indigenous people about the potential negative impacts that this protein development strategy may have on their lands and rights.
At a minimum, for the above reasons, I urge the provincial Government to abandon this strategy and re-think its unbridled support for international corporate interests and turn its attention to supporting ecologically sound agriculture, real farmers and to protecting the public interest in the environment, clean water and land and healthy rural lifestyles while engaging in true reconciliation with indigenous peoples.