Even our national bird - the Canada jay - is not immune from the ravages of manmade climate change. 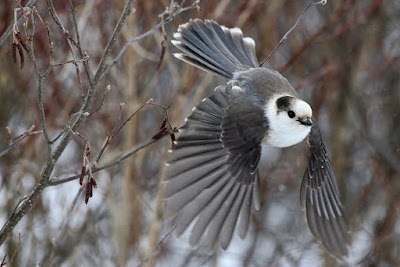 Decades of Canadian research, just released , finds "strong evidence" that increasing "freeze-thaw" cycles are destroying food the birds store away in the fall. This, in turn is damaging their ability to reproduce and likely playing a role in a severe population decline in at least one region. by Larry Powell   A Canada jay - aka - "Gray jay" or "Whiskey-Jack." Photo by Steve Phillips, via  Canadian Geographic  magazine. It's been known for some time that our changing climate is leading to reductions, even entire removal of many species from certain areas (a process called "extirpation"). This new research by the University of Guelph, sheds more light on just how that happens.  Using 40 years of breeding data, scientists studied Canada jays  (scientific name p erisoreus canadensis )   at the southern edge of their range in Algonquin Park, Ontario. (The birds can be found in all Canadian provinces a
2 comments
Read more
More posts