Fungicides move into the headlines. And not in a good way. Letter. 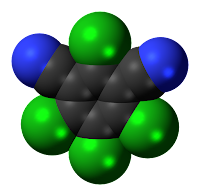 Dear Editor, These are dark days for science.  A chlorothalonil molecule. Image by Jynto. A month ago, the European Union announced it would ban the widely-used fungicide,  chlorothalonil.   Why?  Because experts in its own Food Safety Agency  suspected it was carcinogenic - or cancer-causing. It just so happens, that very same product is also used right here in Canada, and apparently in no small amounts, either! Yet our own Canadian "regulator," the PMRA, re-assessed the chemical less than a year ago.  While it imposed some restrictions, it will still allow its main use as a treatment for mold, mildew and blight in food crops, to continue. Fast forward to today. The New York Times is now reporting that a new and deadly  fungal infection ,  Candida aurus,  is moving across the globe, with "numerous cases" reported in many countries, including Canada. The fungus is claiming many lives and proving to be well-nigh indestructible. Why? Accordin
Post a comment
Read more
More posts