Rapidly warming oceans have left many northern marine mammals swimming in troubled waters. But perhaps none more so than that strange and mysterious "unicorn of the sea," the narwhal.

Narwhals are cetaceans, a family of marine mammals which includes whales and dolphins. Most are found in Canada's Baffin Bay and Davis Strait, in the high Arctic and Atlantic Arctic. Others live off Greenland, Norway and Russia. Many spend several months over winter, beneath the ice-pack, feeding on fish, squid and shrimp and their summers in more open water. It's believed they're capable of diving as deep as 15 hundred meters and holding their breath for an astonishing 25 minutes! 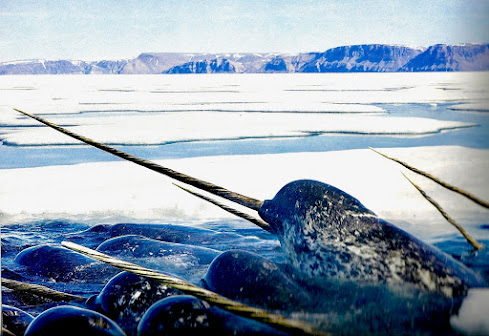 A pod "breaches" through an opening in the sea-ice.
A US Fish & Wildlife Service photo.
They can weigh up to two thousand kilograms and reach a length of about five meters. They're much larger than some dolphin species, but tiny compared to the mighty blue whale. Many migrate along the ice's edge some 17 hundred kilometres from Canada to Russia.

The males grow long, spiral tusks - actually overgrown teeth - that can protrude up to three metres from their head. While they’re predators, narwhals are also preyed upon. Killer whales (orcas) are believed to be taking them increasingly as warming waters lure the orcas further north.

Indigenous hunters of Greenland and Canadian high Arctic - the Inuit - have, for centuries, depended on them as an important food source. Canada officially recognizes the right of the Inuit to hunt them. But they must adhere to a quota system. It's based on findings from periodic, scientific aerial surveys mandated by both Canada and Greenland, designed to protect narwhal populations from over-harvesting.

Recent numbers are hard to find. But one official survey in 2010 concluded that Inuit hunters took almost a thousand narwhals off Canada and Greenland that year.

So, just how intimately are narwhals tied to their world of ice and snow?

"Narwhals are uniquely adapted to the extreme conditions of an Arctic existence," the study states, "and their evolution and ecology intrinsically tied to the past and present sea ice dynamics of the region." Narwhals are known to have lived through extreme climatic changes for thousands of years. Yet they're also thought to be among the most vulnerable to those changes of any of the northern marine mammals.

The researchers hoped, by studying their past, they could gain an insight into their future. What they found was concerning. Before and after the onset of the last ice age (LGM), more than 26 thousand years ago, both the number of narwhals and their genetic diversity were perilously low. But they "responded positively" to both the warming and expansion of habitat which occurred after it ended some 19 thousand years ago. Their numbers increased, and so did other marine predators like belugas and bowhead whales.

However, the benefits such animals enjoyed in that post-glacial period, may be coming to an end. "Many polar marine predators are being negatively affected by global warming, which is decreasing the availability of habitat and prey," the study finds. "Although the range and effective population size of narwhals increased post-LGM, their future in a rapidly changing Arctic is uncertain. Narwhal distribution will be further affected in the near future, as the species also faces increased human encroachment, changes in prey availability, new competitors and increased predation rate by killer whales."

Areas which were once inaccessible to people, due to ice and snow cover, are now receding. This is allowing more activities such as fishing, oil exploration and drilling. And narwhals are known to be easily disturbed, and to flee from areas they like to frequent in summer, like fiords, bays and inlets.

So, are their numbers crashing?

The researchers admit, there's a good deal of uncertainty when it comes to population trends. World population estimates have ranged from 50 thousand to 170 thousand. As those estimates have wavered, so has their status on the endangered species list of the International Union for Conservation of Nature - from "nearly threatened" to "of least concern."

A veteran biologist with Fisheries and Oceans Canada, Dr. Steven Ferguson, has extensive experience observing marine mammals in the north. While he doesn't give hard numbers, he tells PinP, "Both the Baffin Bay and Northern Hudson Bay populations appear to be relatively constant and do not appear to be depleted."

However, the good news seems to end there.

"Populations off the eastern shores of Greenland," he goes on, "seem to be experiencing a decline. And two stocks off West Greenland, appear to be lower in abundance relative to the past."

So, will these wondrous "unicorns of the sea" continue to ply their ways through the world's northern oceans just as they have for so long in the past? Or are their numbers destined to dwindle to a dangerous few, like so many other of Earth's wild things?

This latest study is now published in the Royal Society's journal,“Biological Sciences.”