The lynx vs. the bobcat. Two species of wild cat in Ontario, Canada, may face dramatically different futures. Is this "survival of the fittest?" 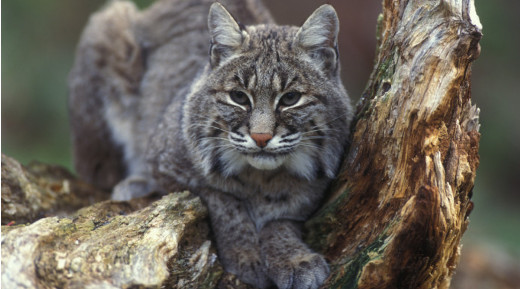 To the untrained eye, the two species might pass as overgrown house cats. They're actually "felids" or mammals belonging to felidae, a family of wild cats. 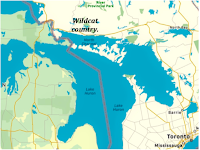 Both live side by side in the wilds of Ontario, north of Lake Huron (see map).

Researchers at the University of Trent (U of T) in Peterborough, Ontario, looked at bobcat and lynx numbers, movements and behaviour over three winters.

Their findings seem to show the bobcat holding an edge over the lynx in the struggle to survive, if not thrive in their rapidly-changing world.

The scientists are unable to give hard numbers. But, "harvest records" which document the numbers taken by trappers, offer an insight.

The lead author, Robby Marrotte, tells PinP, "We've noticed that the number of lynx harvested on traplines has decreased compared to 1960-80, while bobcat harvest has increased."

(Ironically, while trapping has been known to diminish populations of fur-bearing animals, harvest records can also act as a sort of census - the more of a given species trapped, the higher their populations are likely to be.)

But there's more than just numbers at play here. Bobcats have also managed to expand their Ontario range northward, into territory previously occupied by the lynx.

And, while no regional breakdown is given, an earlier, large study on ungulates and predators in 2004, found the range of the lynx, continent-wide, had shrunk by a staggering 40% from its historical range.

So why is this "world of the wildcat" unfolding as it is?

Well, the lynx is a "specialist," more dependent on the unbroken or homogenous cover of the boreal forest. It's therefore more vulnerable to human intrusion such as land clearing.

The bobcat, on the other hand, is a "generalist" who can better cope with a more open habitat and young, deciduous forests which often evolve after activities such as logging and road-building. So it is the bobcat, not the lynx, which is likely to be found in areas affected most by a human footprint.

And then, there's the matter of diet. The lynx feeds almost exclusively on the snowshoe hare and is vulnerable when hare populations crash. The bobcat on the other hand, preys on a variety of species, so has more to choose from.

The lynx has much larger feet, giving it a distinct advantage over the bobcat while hunting in deep snow. But deep-snow terrains are shrinking as manmade "global heating" does its work. This could remove yet another advantage from the lynx as time goes on.

The two species do interbreed, but rarely. (The researchers never observed their footprints coming anywhere close to one another along snowmobile trails they used in their studies.) But, if bobcat numbers do increase, along with interbreeding, it's speculated this, too could contribute to the lynx's undoing. It could lead to gene dominance by the bobcat and even extinction for the lynx.

However, researcher Marrotte believes, talk of extinction is premature.

"I wouldn’t say extinction or extirpation just yet. Right now, all it takes is a few good winters and denser snowshoe hare populations and the bobcat will move out and the lynx will eventually move back in. In the next decade, there might be more snow on the northern shores of Lake Huron, because moisture level will increase. This could temporarily benefit the lynx, but eventually this snow will just start melting earlier and the bobcat will be able to move in again."

So, ultimately, it all comes down to this.

"The story of the bobcat and the lynx is one of the loss of a unique, boreal specialist due to anthropogenic change," concludes the study, "and eventual replacement by an adaptable generalist."
Email Post
Labels: bobcat Climate crisis Endangered Species lynx