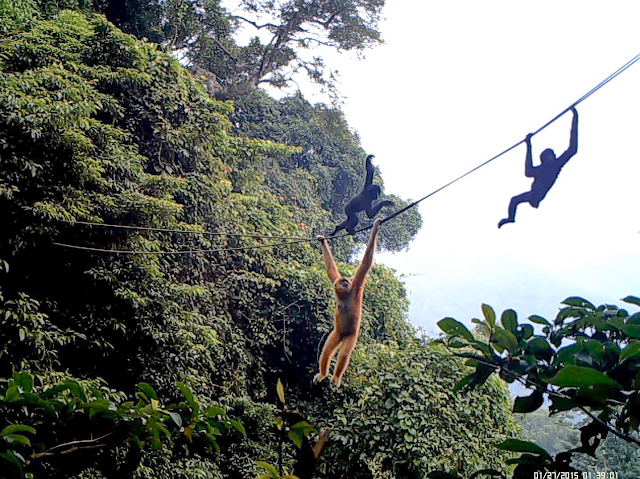 by Larry Powell Hainan gibbons started to use the canopy bridge 176 days after installation. Females and small juveniles were the faithful users. The Hainan gibbon  (Nomascus hainanus) is described as "The world's most critically endangered primate." In fact, its numbers are said to be much lower than any other primate on Earth, with only about 30 individuals remaining for the entire species. It's found in just a single block of forest on Hainan Island, China, and nowhere else.  The adult male is jet black with a hairy crest. The female is golden yellow with a black crown patch. The immature gibbon is black, regardless of gender. Like so many similar creatures, it travels through the forest canopy, tree-to-tree. But major disturbances, like roads or landslides, can produce major gaps or gorges which seriously restrict its movements. This, in turn, can make it harder for it to feed or breed, but easier to be killed by predators. Professional tree climber in action con
Post a comment
Read more
More posts