Serious declines in oxygen levels are recorded in the world's temperate lakes.

Widespread, long-term declines in temperate lake oxygen levels have been reported in Nature this week. This trend, calculated for nearly 400 lakes within an 80-year period, may be linked to warming temperatures and decreasing water clarity. The declines could threaten essential lake ecosystems. 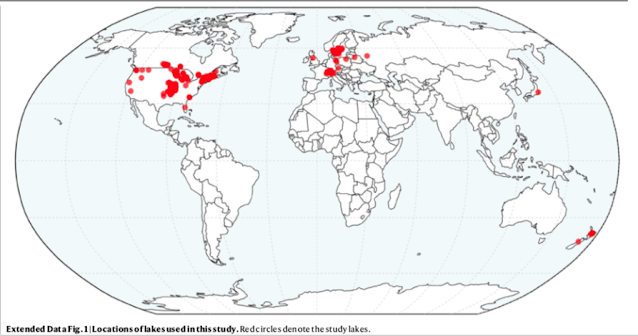 The concentration of dissolved oxygen in aquatic systems can affect the balance of nutrients, biodiversity, the quality of drinking water and greenhouse gas emissions. While oxygen loss in oceans has been documented, the changes in dissolved oxygen concentrations in lakes are less well understood, in part owing to a lack of long-term and large-scale studies.

Kevin Rose and authors measured temperature and dissolved oxygen levels for almost 400 lakes (mostly in Europe and the United States) between 1941 and 2017. Declines in dissolved oxygen are up to nine times greater than those observed in the oceans.

Increased water temperatures are associated with reduced oxygen concentration in surface waters. And lower oxygen levels in deeper waters are linked to the formation of distinct thermal layers at different depths, along with reduced water clarity.

There were some exceptions to these trends; for example, a large subset of 87 lakes exhibited increases in both water temperature and dissolved oxygen concentration. However, this anomaly could be attributed to algal blooms, which may increase concentrations at the surface, but reduce oxygen solubility lower down.

As the authors conclude, ongoing, rigorous efforts will be needed to counter these effects.