What are we putting into our water ?
PLT photo
We are putting toxic waste (poison) into our water. Toxic = dangerous, immediate or long term effects. In the absence of scientific research, no one should simply claim those products are safe and acceptable, then allow them to be discarded into a water source.

There is absolutely no legitimate government interest
fulfilled, by allowing arsenic, lead and other contaminants
into a water source. Yet, that is exactly what is happening!
The town of Virden, Manitoba, for instance, has been issued
a  licence by the province  to dump arsenic taken from the
water treatment plant, into a surface water source, which
downstream, enters into the Assiniboine River.

The questions then that need to be answered are:
Why does government, the province of Manitoba
condone and permit such a disdainful action?

Why are the long-term health risks from chronic exposure
to arsenic being ignored? Why are we being valued
as subjects, used in an experimental laboratory?

Why is this human impact allowed?

Why are people being complacent and not speaking
out on this travesty and mockery to our personal health
and the health of water, the life blood of all living creatures.?

This is a shameful and disgusting act against humans
and our most precious resource. It's time that the
public retaliated; put aside its complacency, and
started voicing  its opposition to the province.

The government's lack of moral and humane principles
must be challenged.  Arsenic is a deadly poison and warrants
extreme respect, not defensive political bafflegab.

Email ThisBlogThis!Share to TwitterShare to FacebookShare to Pinterest
Labels: Environmental, Letter To The Editor, Water

The world needs "a rapid and significant shift from conventional, monoculture-based and high external-input-dependent industrial production towards mosaics of sustainable, regenerative production systems." Full story here.
at September 23, 2013 No comments:

More than half a trillion tonnes of carbon have been burned since the industrial revolution, according to an IPCC report. Full story here.

Rachelle Van Zanten - My Country (Official Video) from Taylor F. on Vimeo.
at September 22, 2013 No comments:

(The Toronto Star)
There was never doubt that the deadly train derailment in Lac-Mégantic caused an environmental disaster, but a report made public this week by Quebec's ministry of the environment details the extent of the devastation to the soil, river and lake near the disaster zone. Details here.

Water is Our Most Precious Resource

Canada has more lakes than the rest of the world combined.

Water is the life blood of all living things.

It just seems we have so much fresh water in Canada, we don't look after it, as we know we should. (U.S. and Canada need to reduce algae bloom on Lake Erie, WFP 29 Aug)


It is clear that governments have ignored the basic principles of water stewardship for too many years in the pursuit of narrow economic interests. 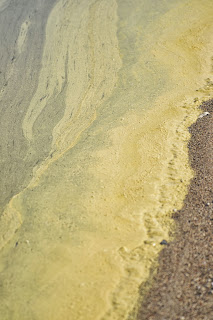 Lake Winnipeg has become a horrid reminder of devastation, that we are leaving our children and their children to bear alone.


Now Lake Erie has a sickness that has returned.

So many of our Lakes have become diseased.

The name of this disease is 'human complacency.'


Slime on a Lake Winnipeg beach near
Gimli. PLT photo.

Email ThisBlogThis!Share to TwitterShare to FacebookShare to Pinterest
Labels: Environmental, Letter To The Editor, Water


Wake up before it is too late: Make agriculture truly sustainable now for food security in a changing climate. Full story here.