Solar Has Won. Even if Coal Were Free to Burn, Power Stations Couldn't Compete

TheGuardian
As early as 2018, solar could be economically viable to power big cities. By 2040 over half of all electricity may be generated in the same place it's used. Centralised, coal-fired power is over. Full story here.

Kneeling in Fenway Park to the Gods of War


BOSTON—On Saturday I went to one of the massive temples across the country where we celebrate our state religion. Full story here.
at July 07, 2014 No comments:

I wrote this story almost three years ago. I am re-posting it because a flood similar to the "one-in-300 year-kind" we had in 2011 - in Manitoba - is happening again THREE YEARS LATER! I continue to be struck by how little things change. So-called leaders (and ordinary people) remain in a stupor - an unexplained state of mass delusion and denial - approaching our climate crisis from every direction but a rational one.
A number of scenarios outlined below have now changed, but the general sentiment remains.
============
by Larry Powell

If a shrink were to examine the brains of North America's political leaders, what do you suppose she would find?

What parts of what lobes would be addressing the cataclysmic changes our planet's climate is undergoing?

Are the neurons of these leaders' brains actually transmitting, making them aware that Earth is going through a monumental crisis that needs their immediate attention? Or are they somehow "shorting out," as if each leader was sticking a finger in a light socket?

Here are just a few examples of what I mean. Can You Say "Climate Change?"

A sodden farm field near Neepawa, Manitoba.
Another "severe weather event," this one a doozy, has just blown through my neck of the woods. Deluges of rain over a huge area of the Canadian prairies, driven by strong winds, have brought flooding, property damage and washed-out roads to scores of communities in Saskatchewan and Manitoba. It left power outages, dangling live wires, trees on top of cars, evacuations (including at least one hospital and one care home), flooded basements (including my brother's in Regina) and human misery, galore. Ditches and roads turned into rivers and farm fields into rice paddies. They were all part of a package deal included in slow-moving electrical storms that lasted for an agonizing three days or so, from west of Regina through to eastern Manitoba.

The storms were made all the worse due to the extremely wet spring which preceded them. Already sodden ground left few places for the water to go. 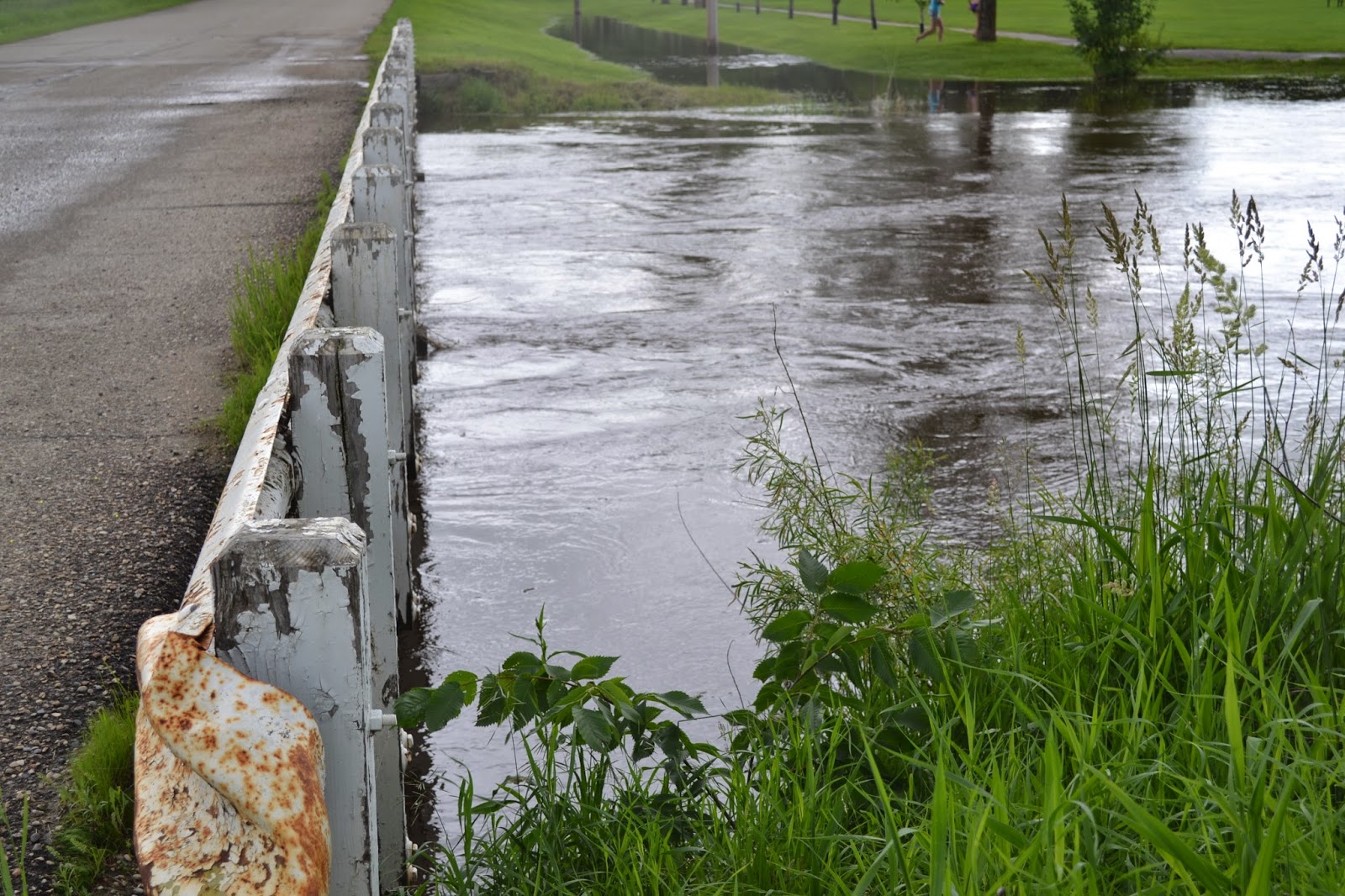 Waters of the Whitemud River touch the bridge at Neepawa.
A friend who lives near the southwestern Manitoba town of Virden, John Fefchak writes, "We are fine where we live, but the town of Virden, it's a disaster. In all my years (and there's been quite a few), I have never been witness to such flooding. There was huge flooding in 1969, and guess, where they allowed the most recent housing development. It's called 'Seventh Heaven,' right in the same place. Too bad people don't pay attention or heed warnings.  Mother Nature will smack you every time! All those residents were evacuated yesterday!"

John adds, "Our little prairie creek, (the one the province allows arsenic into) is now a raging, white rapids river, spilling into the swollen Assiniboine about 3 miles downstream.

"Just for the record, we have had 4.6 inches of rain in the past 2 days, and for the month of June…..nearly 11 inches. Our yearly average has been 14 inches. Our car dealership, Mainline Motors, is flooded out." 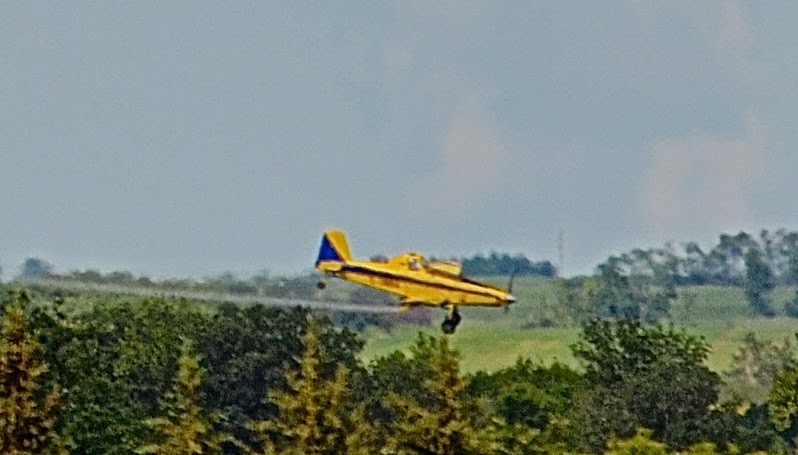 More crop spraying is being done from the air because fields are too wet
for ground applicators. I spotted this crop-duster just west
of Neepawa this morning. (P in P photos.)
And it all happened, yet again, without anyone bothering to utter the dreaded phrase, "climate change." The closest I saw was on TV when a meteorologist (no not a climate scientist, but one who tells you what the weather will be tomorrow), was asked if this was part of the broader "trend" (which I took to mean "climate change). She answered, predictably, "You can't definitely connect any single incident to....the....trend."

How in hell can humanity be expected to do something about this defining environmental crisis of our time when we can't even utter the words?


Many areas of Manitoba received significant amounts of rainfall over the weekend, adding to the rainfall already received over the past few weeks. Full story here.
at July 01, 2014 No comments:


Global warming is melting sea ice so fast that more than half of Antarctica’s population of Emperor penguins are set to be wiped out by the end of the century, according to alarming new research saying they should be listed as an endangered species. Details here.
at June 30, 2014 No comments: