Free Trade: Pathway to Prosperity - or Back Road to Corporatism?


As globalization reaches a frenzied pace, free trade agreements (FTAs) between nations are coming thick and fast, too.

Now, a knowledgable source with impressive credentials is sounding the latest cautionary note about "CETA," the Comprehensive Economic and Trade Agreement which Prime Minister Harper and the European Union signed, in principle last year. 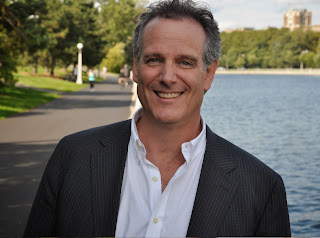 A Canadian expert in international law, Howard Mann, (above) is lending an important new voice to a now-familiar chorus of alarm about "CETA," in particular.

For decades, large corporations have been using provisions within existing free trade agreements to sue sovereign nations who pass certain laws protecting the environment and health of their citizens. The corporations view such laws as assaults on their own "rights" to do business and make a profit in those countries.
When contacted by PinP, Claude Rochon, a spokesperson for Foreign Affairs, Trade and Development Canada, would say only, “Our Government's actions will continue to reflect our commitment to ensure Canadians continue to have access to the affordable drugs they need, while promoting innovation and job creation.”

In a twist to what critics might already call a sordid tale, a Canadian company, Infinito Gold, based in Calgary, is suing the Central-American nation of Costa Rica under terms of an FTA between the two countries.

It wants $100 million dollars from the small nation for saying "no" to a company plan to build a "cyanide-leach" gold mine in one of its pristine rain forests (PinP photo - r.). Costa Rica depends for much of its revenue, on tourists coming to enjoy the nation's natural beauty.

Some observers say the company will win its case.

And, in a recent column, British journalist George Monbiot writes, "In El Salvador, an Australian company is now suing the government before a closed tribunal of corporate lawyers for $300 million (nearly half the country's annual budget) in potential profits foregone. Why? Because El Salvador has refused permission for a gold mine that would poison people's drinking water."


Except for Ethyl Corp., none of these cases has been resolved yet.

When PinP asked the government official, Claude Rochon, to respond to the trade actions against Canada, he responded, "As always, the Government of Canada will vigorously defend interests of Canadian in this dispute settlement process. The Government of Canada is committed to transparency in NAFTA Chapter 11 disputes and posts public versions of documents on the Department's website."
So what does the future hold in a world where free trade agreements
are becoming "the new normal?"

Howard Mann testified before the Commons Committee on International Trade that, “In my opinion, the Investment Chapter (of CETA), if it continues on what appears to be its present course, will provide foreign investors into Canada with the most investor-friendly set of corporate rights ever drafted by the Canadian government into a treaty." After studying secret drafts which have leaked out, he declared, "This is a Big Deal. A Very Big Deal!"

In an interview with PinP later, Mann suggests, we haven't seen anything yet, in terms of the number of lawsuits which Corporations will be launching against Canada once CETA becomes law.

PinP: “Is there a risk that CETA, once ratified, will lead to more lawsuits by investors against Canada?"

Mann:  “No, there is a certainty! There have been over 600 such arbitrations commenced globally in the past 20 years, about half by EU-based companies. There is no reason to think they will not be equally aggressive using the mechanism against Canada. The creativity of industry in using the investor-state arbitration process to fend off any and every kind of government measure continues to amaze me, even after 18 years working in this field. From challenging anti-smoking measures, to protecting against side-effects of medications, fracking under the St. Lawrence River, protecting water basins in fragile environments, there is no area of decision-making that is outside the scope of these agreements.”

Mann further warns that CETA's provisions for increased investor rights, “Will weaken the ability of Canada’s elected lawmakers, both federal and provincial, to legislate in major areas of public policy, including environment and health.”

Mann is surprisingly candid over the lack of “critical review” by the opposition Liberals over CETA.

“That the Liberal party supports free trade and increased investments is fine. That they are blind to the fact that the language used in such agreements can have multiple effects, including on Canadian regulatory capacity to replace the environmental laws the present government has dismantled, as they have promised they will, is incomprehensible. Words matter, but it seems they prefer to support the notion of free trade without any attention to the actual language in the actual text. As a life-long Liberal, I find it stupefying.”

A Study in Contrasts

Just how the governments of Canada and the U.K. are approaching such trade treaties has become a study in contrast.

In the United Kingdom, MPs from all parties have called for a halt to talks on a very similar treaty with the U.S. Why? According to the newspaper, The Independent, they fear it may put “British sovereignty ‘at risk’ by surrendering judicial independence to multinational corporations.”

In Canada, far from showing hesitation, there’s been nothing but unbridled enthusiasm on the part of the federal government. Prime Minister Harper calls the CETA, “The biggest deal Canada has ever made.” In a letter to the editor, one of his western MPs, Robert Sopuck, writes, it will bring many jobs to his riding while raising the incomes of families there.

A Government website boasts that Canada “currently has 25 foreign investment promotion and protection agreements (FIPAs) in force around the world, with hope of more to come. It further boasts that negotiations over the CETA have been “the most transparent and inclusive in Canada’s history.” 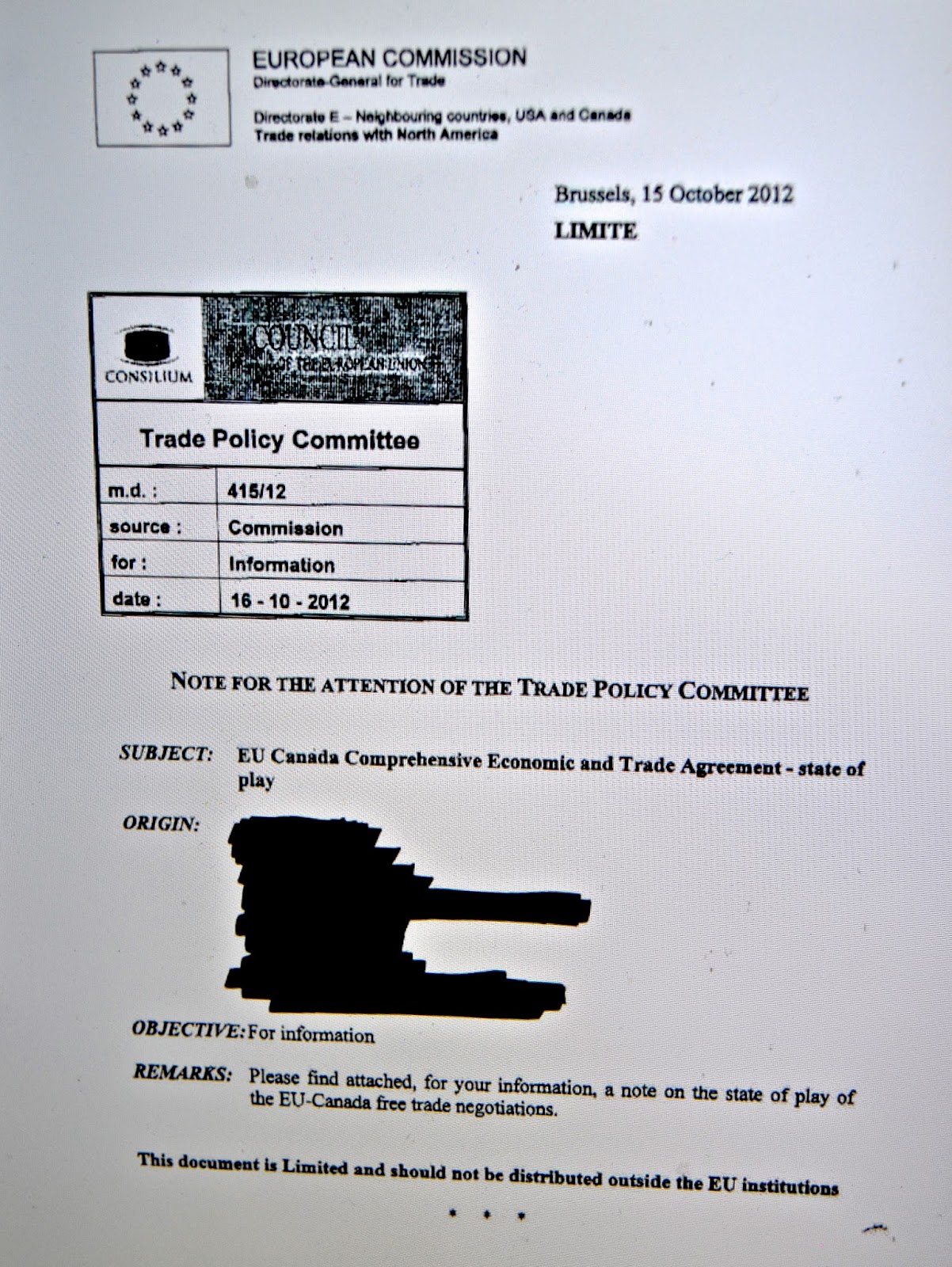 But the reality, according to Mann, is quite different.
A redacted document on early CETA talks, which leaked onto the internet.

“The EU-US investment negotiations have been put on hold in order to have a full-scale three month public consultation.

No such opportunity has ever been had in Canada on the CETA. We have to depend on leaks because our government will not issue an official draft.”


As significant as his warnings are, they are not the first. Groups such as the Council of Canadians and Canadian Centre for Policy Alternatives have been saying similar things for years.

But, given Mann’s impressive credentials and experience, and, as all the cumulative evidence piles up, will Ottawa finally pay attention, or ignore it as its peril?
l.p.
Related: Don't Believe the Harperites! There ARE Downsides to Free Trade! (Letter)


"Trade Secrets. Why will no one answer the obvious, massive questions about TTIP?"
at 16:59 3 comments: Links to this post

Grain, Trains and Autocrats: Farmers Pay the Price for Dismantling Wheat Board

There is a direct correlation between the loss of the farmer-elected Canadian Wheat Board (CWB) and the current rail transportation boondoggle. Details here.
at 12:21 1 comment: Links to this post