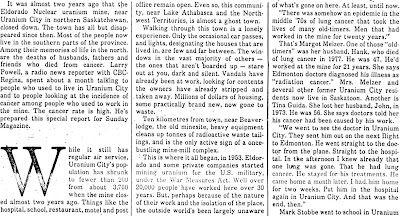 PUBLISHER'S COMMENT: In view of the ongoing nuclear crisis in Japan, I've decided to "recycle" one of my old stories, below. I wrote it while working as a journalist with CBC Radio in Regina, SK in the late '80s. It chronicles years of cancer, a virtual "epidemic" among workers at the uranium mine at Uranium City, in the extreme north end of that province. If nothing else, it might provide an insight into the fact that it is not just the power plant phase of the nuclear system which is problematic. Keep in mind, given that Saskatchewan is a leading player in uranium production and has been for some time, the fuel rods melting down in Japan as we speak, may well have been made from Saskatchewan uranium.  (2-pt. Just click to enlarge.) I even sent it to George Monbiot, hoping to help convince him to turn away from his recent and ill-advised conversion to all things nuclear. He has not responded!  ==== 1984 - by Larry Powell
2 comments
Read more

Save Our Lake - Nature of Things Video on Lake Winnipeg 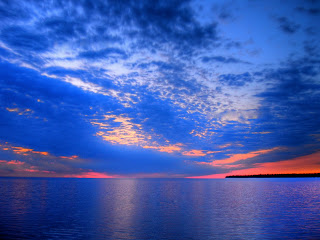 A mystery lurks in Lake Winnipeg. And it's  one which science is only now waking to. Watch video here. (Runs about 45 mins.)
Post a comment
Read more
More posts