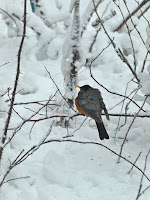 .    A major storm is causing snow and rain along with high winds that are expected to shift from southerly to northerly directions across most of southern Manitoba.  The slow-moving system is expected to move across Manitoba today (Sat.) and tomorrow.


A lonely Robin awaits the return of spring.
The storm will affect the dates of river crests and prolong the duration of the flood.  Forecasters are assessing the storm's impact and will have more information once it is over.

.    Due to high wind gusts forecast across southern Manitoba today, those properties with flood-protection works and exposed to north winds can expect wind setup and wave action and are advised to assess the need for flood-protection reinforcements. 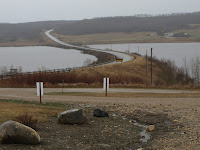 Assiniboine River
.    Water levels on the Shellmouth Reservoir increased by 1.18 ft. since yesterday to 1,411.55 ft. 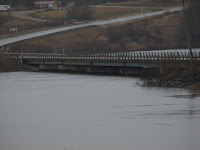 Above, the bridge over the Lake of the Prairies (Shellmouth Reservoir) near Roblin.
Inflows into the Shellmouth Reservoir have decreased to approximately 16,500 cfs.
A tighter shot showing water levels beneath the bridge deck.
Outflows are the maximum possible with current reservoir levels at 9,080 cfs.

.    The Shellmouth Reservoir is forecast to receive significant run-off from the current storm, adding to current high water levels.  The dam will be operated to prevent outflows from exceeding 10,000 cfs.


Manitoba may well experience the longest period of flooding in its history, thanks to cooler weather and now this latest system with its unwanted precipitation in the form of wet snow. As much as 30 cm (1 ft) has already fallen in some parts of western Manitoba, with winds gusting up to 100 km/hr. (One community, near Dauphin, recorded an incredible 50cm!)
(All photos by l.p.)
at April 30, 2011 No comments: Links to this post