A fight to maintain consumer choice and farm independence has landed Maine farmer Jim Gerritsen on Utne Reader's list of "25 Visionaries Who Are Changing Your World," published in the November/December edition of the magazine on newsstands now. Details here.
at November 10, 2011 No comments:

Has Business as Usual for the Tar Sands Come to an End?

Environmental Defence
Dear Larry,
The first cut is the deepest. Business as usual for the tar sands industry has come to an end.
Today, we can all celebrate a huge victory. President Obama has agreed to delay the construction of TransCanada’s proposed Keystone XL tar sands pipeline in order to further review its potential impacts, including climate change.

This shows the importance of standing up for the clean energy future we want. Just 3 days ago, 12,000 Americans showed up at the White House to urge President Obama to stick by his pledge to reduce dependence on oil.
Please take a minute to send a thank you note to President Obama.
Canada needs to pay attention to this message. There is no such thing as “business as usual” for the tar sands industry any longer. The longer Canada delays getting serious about reining in tar sands pollution and transitioning to a clean energy economy, the more of this type of controversy we should expect.
The delay announced today has the potential to not only protect a water source that provides 3 million people with safe drinking water from the damage of an oil spilll, but it also gives more time to consider the impacts of the proposed pipeline on efforts to fight global warming. Our collective efforts are having an impact.
The near-doubling of tar sands exports to the U.S. that would be needed to fill the pipeline would take North America in the wrong direction, increasing our dependence on oil at a time when scientists around the world are calling for us to dramatically transition away from fossil fuels to avoid catastrophic climate change.
This would not have happened without your hard work, and the thousands of other people like you who have voiced opposition to continued tar sands expansion.
Please consider sending a message to the White House to thank president Obama for listening to these concerns.
You can send a letter HERE.
at November 10, 2011 No comments:

(Reuters) - The United States said on Thursday it will study a new route for the Keystone XL Canada-to-Texas oil pipeline, delaying any final approval beyond the U.S. 2012 election and sparing U.S. President Barack Obama a politically risky decision during an election year. Details here.
Please also read: U.S. Delays Decision on Pipeline Until After Election - (The New York Times)

Is Manitoba's Brokenhead River about to become a toxic dumping ground for an Alberta-based sand-mining company? 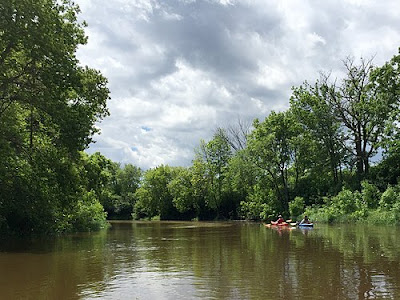