Berens River is out of Gasoline. Emergency Evacuations Being Considered.

CBC Radio is reporting that the northern Manitoba community of Berens River is out of gasoline. The reason?   Melting ice roads aren't new. This CBC photo shows a truck stuck last year. Record warm weather is making it impossible to use the winter road to bring in supplies from the south. Emergency evacuations of people who may need medical help, are apparently being considered.   PLT: This has to be the final irony. Failure of the winter ice roads, an emergency more than likely caused by global warming, in turn caused by the burning of fossil fuels by we humans, is now leaving communities like Berens River without - fossil fuels! And people are supposed to be the smartest species!
Post a comment
Read more 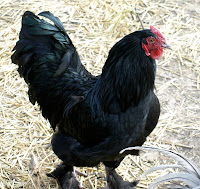 GARDINER HARRIS - New York Times - January 4'12 WASHINGTON — Federal drug regulators announced on Wednesday that farmers and ranchers must restrict their use of a critical class of antibiotics in cattle, pigs, chickens and turkeys because such practices may have contributed to the growing threat in people of bacterial infections that are resistant to treatment. Details here. PLT photo PLT: What about Canada?
Post a comment
Read more
More posts