MEDIA RELEASE, January 18, 2012 "We welcome the decision by the Obama Administration to say no to the Keystone XL pipeline," said John Bennett, Executive Director of Sierra Club Canada. “Obama listened to Americans and shared their concerns about the environmental and social impacts. He made the right decision.” "The Keystone XL pipeline is a bad idea based on bad economics. Today is a victory for the environment and future generations,” said Mr. Bennett. "We only wish the Canadian government would act as thoughtfully when it comes to other proposed mega-Tar Sands projects like the Northern Gateway Pipeline.” John Bennett, Executive Director Sierra Club Canada jb@sierraclub.ca 613-291-6888 Follow John Bennett on Twitter
Post a comment
Read more 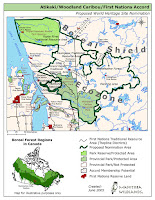 The Winnipeg Free Press - 01/18/2012 WINNIPEG - A United Nations organization will soon have before it a bid to designate a huge tract of boreal forest along the Manitoba-Ontario boundaries as a world heritage site. Read more here.
Post a comment
Read more
More posts