- January 22, 2012
Dear Editor, I see the powerful tentacles of Big Oil are tightening around us again. The "grassroots" group known as EthicalOil.org is reaching out through a compliant media, to spread its fear campaign that "foreign hordes," not Canadians, are going to decide whether the proposed Northern Gateway pipeline will be approved. Grassroots, my ass!  The talented, dedicated group of researchers who publishes * DESMOGBLOG.COM has exposed "EthicalOil.org" for what it is; "A small industry front group with secretive funding sources." As DESMOG explains, EthicalOil's message is being amplified through an "echo chamber" of powerful allies, including Prime Minister Stephen Harper and Sun Media ("Fox News North") to which Harper has close connections. (Not to mention Harper minions like Joe Oliver, whose earlier, infamous letter accused pipeline opponents of being a bunch of "radicals.") The EthicalOil message? Fo
1 comment
Read more

Global Warming the Cause of Heat Waves in US & Russia - Hansen 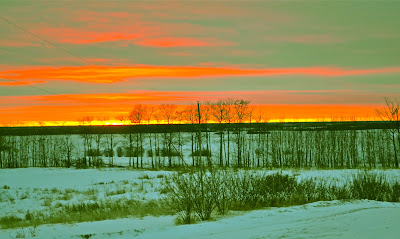 Planetsave-Jan 25'12   Sunset on the Canadian Prairie - PLT photo "We conclude that extreme heat waves, such as that in Texas and Oklahoma in 2011 and Moscow in 2010, were 'caused' by global warming,".... Details here.
Post a comment
Read more