Keep Arsenic out of the Water at Virden, Manitoba, Canada! An Open Letter to Manitoba's Minister of Environment 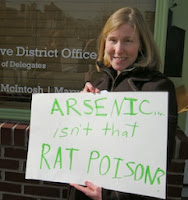 Your department staff says it's OK to get rid of arsenic into a surface water source. However, this only leads to more questions that need answers.
(Photo, l. courtesy of Food & Water Watch)


After waiting over 7 months,Director Don Labossierie's August 7 reply  is not very encouraging about how the province deals with the disposal of captured arsenic,especially when we have been told to 'never put' arsenic into a water source.
At a public meeting held in Virden in May of 2012, Dr. Susan Roberecki, of Manitoba Health told us,  "Arsenic is not something that is put in water. It should never be put in water".
Yet, the province of Manitoba has issued a permit to the Town of Virden to do exactly that ! Virden removes arsenic from it's well water source through its water treatment system in an attempt to meet safe drinking water standards, captures it and then has permission to release it into a freshwater creek.
Labossier's justification for this practice includes information contained on an internet link.  But I can find no reference there that supports this.  After 17 years of trying to get government authorities to address Virdens's arsenic disposal practices, it appears that this is acceptable departmental policy.

Is this indeed the policy of the Manitoba government?

Is this the best solution your water experts can offer for keeping our water sources safe and protecting people's health?

Is not the discharge of a poison, a pollutant, that contaminates a surface water source illegal under the Environment Act and normally, be an issue of grave concern, a violation and despicable practise?

Does Labossiere know where this poison arsenic, eventually ends up?Have the "disposal" waters and lands been tested?

I have been informed there are no compliance issues. Makes one wonder, doesn't it?

Permitting something that is wrong does not make it right, it only
makes it legal.

Instead of providing scientific proof that Virden's government approved practices are safe, the link that Labossiere cites says,

Please provide me with a study that proves that Virden's arsenic disposal protocol does not create an unacceptable increased risk to public health with its release into the environment. If a study actually exists, were there any health specialists involved in doing that study?
How did your staff arrive at the conclusion that the Virden permit will protect and not increase the risk to public health and the
environment?

Is it, in fact, your governments policy to accept and permit the release of captured arsenic into a freshwater ecosystem if it is too
costly for the Town to properly store and safely dispose of the removed arsenic  by putting it back into the environment,via Gopher Creek?  Do you agree with your staff that the solution for pollution is dilution?

Finally, who bears the real cost of the savings that accrue to Virden
in disposing of arsenic in the manner in which government has permitted?

It seems government doesn't care. The 'out of sight, out of mind' syndrome is at work.

All Manitobans deserve an honest answer and have a right to expect
government to protect our health, water and environment.
When dealing with arsenic, complacency must never be tolerated, and respect for human and environmental health must be foremost at all times.
I urge you to commit this permit to the waste basket and direct the Town of Virden to use a hazardous waste disposal site for its captured arsenic.

I look forward to your response.

John Fefchak said…
WHAT ARE WE PUTTING INTO OUR WATER !

We are putting toxic waste into our water.
TOXIC (dangerous immediate or long term
effects.)

In the absence of scientific re-search,no one
should simply claim those products are safe
and effective.

There is absolutely no legitimate government
interest fulfilled, by adding arsenic,lead and other
contaminants to a water source.

The question that needs to be answered is:
Why do governments (province of Manitoba)
condone such actions? Why is this human
anthropogenic impact allowed.?