As its name implies, the conference promised a lot.

I am thankful to have been part of it.

More than three hundred people from 15 countries attended the event this past weekend, sponsored by the CBC and University of Winnipeg.

They heard Adrienne Arsenault, a foreign correspondent with CBC TV's flagship newscast, The National, tell a terrifying tale about an assignment she was on in an African nation.
She and her 3-member camera crew went to a cemetery where she had arranged to interview someone, mistakenly believing it would be relatively quiet and safe. Instead, they encountered a gang of drunken thugs who were digging graves. They took the crew hostage at gunpoint, then joked about whether they should bury them in the newly-dug graves. Fortunately, a government official, attending a funeral nearby, intervened and allowed Adrian and her crew to go safely on their way. 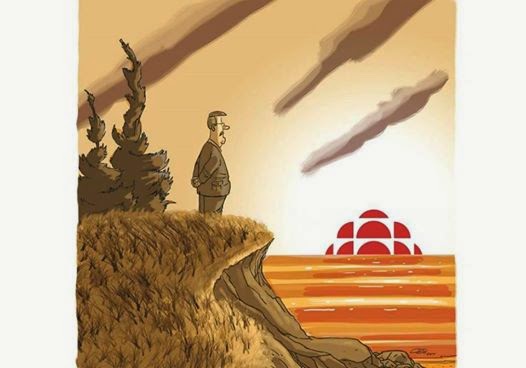 The Chief Correspondent for CBC Television, Peter Mansbridge, told the conference, CBC news teams were "bleeding" due to the latest round of cuts by the government. But, he promised, no matter how tough things get, "We're going to keep going." Mansbridge said the culture of secrecy which has grown up in this country is not what the veterans of D-Day, 70 years ago, fought and died for. "Our purpose is to break that culture. What we do matters to those guys. Courage is contagious."

Another featured speaker was Carl Bernstein, half of the famous Washington Post team which exposed the Watergate scandal and brought down a President 40 years ago. Bernstein choked with emotion when telling the conference how his boss, Katharine Graham, insisted that she be the one authorities deal with when they tried to confiscate his notes. He says, by so doing, Graham put her newspaper empire on the line in defense of the story.

A print journalist, Mike De Souza told a panel, while working for PostMedia news, he exposed a shady deal between Talisman, an oil company and the University of Calgary to cast doubt on the science of climate change. De Souza lost his job with PostMedia when it decided it wanted a more positive image of the oil industry, especially the Alberta's tar sands. De Souza now freelances.

A national reporter for CBC Radio news, Curt Petrovich, revealed how he broke a political scandal in Manitoba in the late '90s. He confirmed that, in 1995, the Conservatives illegally created a political party in order to split the vote and help the Tories win. Petrovich found a "candidate" the Tories had paid to run for the bogus party, and convinced him, with much difficulty, to tell him everything. His story showed that earlier denials by Conservative officials of what was happening, were untrue. Premier Gary Filmon, who lost the next election in 1999, claimed to know nothing. Filmon went on to serve on the committee overseeing the activities of CSIS, Canada's spy agency. He now sits on the board of directors of the communications utility, MTS which he privatized after promising not to do so.

Members of the Enquête investigative team from Radio-Canada, the French division of CBC Television, described how they exposed corruption in the construction industry in Quebec. Their reports led to formation of the Charbonneau Commission which has heard dramatic testimony from crime figures and others about kickbacks, bid-rigging and cosy relationships between a crime figure and a top union leader. (Peter Mansbridge revealed Enquête may lose 1/5 of its staff, due to budget cuts.)

This writer also served on a panel. It examined the role of public and community radio in holding power to account. One small victory happened to me when I worked for CBC Radio in Calgary in the 70s. I broke a story about professional car thieves using loopholes in the laws governing the registering of motor vehicles in Alberta. They were able to "legitimise" stolen vehicles by easily having them registered in that province. I was able to demonstrate how easy it was to "create" a vehicle on paper and, for a small fee, walk away with registration and a license plate. Car theft rings were reportedly doing it all the time. Shortly afterword, Alberta moved to close the loopholes and stop the widespread practise.

The investigating reporters are true heroes. We need them. Problem is that few papers will support them while they do their research. The Magazine Mother Jones publishes investigating reports and they have a charity fund that funds various research projects. Otherwise we are stuck with the copywriters that patch together bits and pieces here and there without really checking anything out.