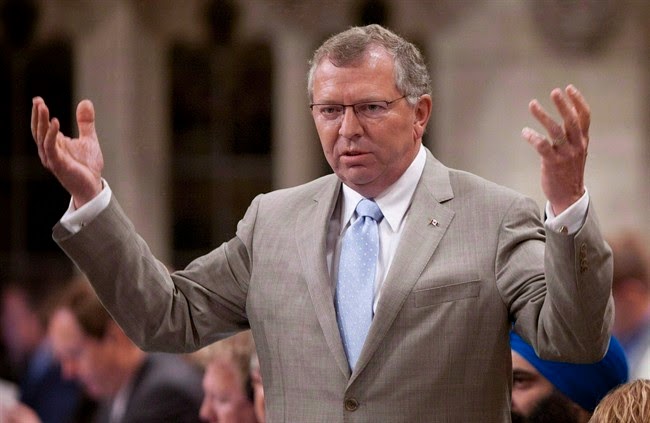 THE CANADIAN PRESS/Adrian Wyld
Menzies (above) was a Conservative MP for about 10 years before being appointed early this year as President and CEO (AKA CBK) of Croplife Canada, an industry organization representing chemical giants like Bayer. Bayer makes "Neonicotinoids," the world's worst family of bee-killing pesticides. CropLife is in the midst of a major lobbying and public relations campaign to prevent Canada from adopting a ban on the pesticides, action the European Union took more than a year ago.

Dear old Ted will be based in Ottawa, where lobbying his old government buddies will come easy. This will help ensure that both the already fat bottom lines of the "Agri-Biz" corporations he now represents and the slaughter of our precious pollinators will continue!

Meanwhile, the Sierra Club Canada Foundation has asked the Ethics Commissioner to examine Menzies' appointment under the Conflict of Interest Act.

According to John Bennett, National Program Director of the Sierra Club Canada Foundation, “A cabinet minister went directly to the board room of CropLife, the pesticide industry’s lobbying arm. We are advised that this could constitute a conflict of interest under the Act and should be investigated.”

Please also read: "New Studies Show Farm Chemicals Are Affecting More Than Bees. Bird Populations are Declining, Too."
at 17:17 No comments: Links to this post

New Tests Find Bee-Killing Pesticides in Over Half of “Bee-Friendly” Plants From Garden Centers Across U.S. and Canada

Friends of the Earth

Washington, D.C. – Many “bee-friendly” home garden plants sold at Home Depot, Lowe’s and Walmart have been pre-treated with pesticides shown to kill bees, according to a study released today by Friends of the Earth and allies. Details here.
PLT photo.