The article needs to be challenged. It insinuates the
NDP government is responsible for the impairment of the Maple Leaf slaughter plant shortages.That is not correct!
They are not responsible for poor governance decisions in this matter,and finger pointing at them alone cannot be justified, as others are also involved.
About 9 years ago, (2006) Manitoba was recognized as the largest producer of hogs in all of Canada,with total production exceeding 9 million animals.
A few more years later, situations developed; barns were shut down, sows were culled and the herd was drastically reduced. This was all accomplished by the hog industry itself, the province had nothing to do with the reduction, Even Maple Leaf itself reduced their sow herd inventory by 69,000 animals at that time.
In 2011, after lengthy studies by renown scientists were released on the situation of Lake Winnipeg waters, the government decided to take a stand. This resulted in
Save the Lake Winnipeg Act, Bill 46. This Act was implemented in Jun of 2011. It received full approval by all parties. A portion of the Act included the requirement for any new barns to have appropriate cutting edge technology, as a treatment of manure, to assist in reducing the phosphorus that was promoting algae growth.
That said, the NDP government of Manitoba at no time was involved with a hog herd reduction that took place in Manitoba.

Mr.Mc Cain needs to look in the mirror and realize that his company also played a supreme role in the hog reduction that he now addresses.
Putting lipstick on the factory hog industry situation and also slamming the government only indicates that his research was lacking the facts of his own making.

Shortage of pigs:
Talk about the POT calling the KETTLE black! …It's not about the pigs it's "The Money"
Mr. McCain and outgoing chair, Karl Kynock both, should know and realize that the reduction of the sow herd by Maple Leaf
alone, of 69,000 animals, would account for 1.7 million fewer pigs. So why did they do it? …and all at taxpayers expense.

Kynock plays the teeter-totter game, when he refers to balancing the industry to the capacity of the plants, The capacity of the Maple Leaf plant was never a secret….so why was the sow herd so drastically eliminated,and the killing of piglets that took place.That is something they alone are accountable for, not the province of Manitoba.

Government of Manitoba calls for evacuation of people and livestock downstream of Rivers dam, in the southwest. 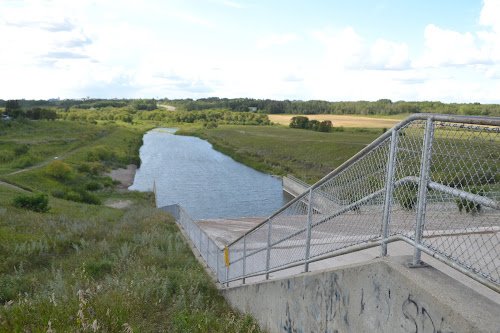