by Larry Powell  (A PinP exclusive.) 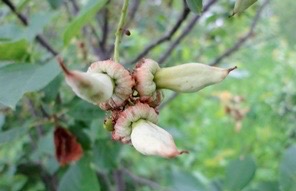 They call it “The Standing Medicine People Project.”

Researchers from three reserves in south-central Manitoba, Long Plain, Swan Lake and Rolling River, have teamed up with the charity, “Food Matters Manitoba,” (FMM) to conduct the project.

They collected samples of six wild plants which grow there – pin cherry, saskatoon, nannyberry, raspberry, grape and the medicinal herb, wiike (or sweet flag). Indigenous gatherers throughout North America have harvested them traditionally as both food and medicine, for centuries. The team submitted the samples to “ALS Laboratory Group,” a certified lab in Winnipeg. There, they were analyzed for 103 different pesticides and heavy metals.

The lab detected several in either the roots, the soil, or both. However, most of the readings were well below levels of concern. In other words, the risk of getting sick from environmental contamination is low. And, if certain precautions are taken, the berries and herbs are still considered safe to eat.

Winnipeg, March 23, 2016 – Green Party of Manitoba Energy advocate for Conservation and Water Stewardship, David Nickarz, says that a Green government would reject all projects associated with construction of the proposed Energy East pipeline.

The Green Party of Manitoba (GPM) thinks that Manitoba Hydro would help Manitobans more by investing in energy retrofitting and development of solar production, rather than quietly preparing to sell hydroelectric power to the Energy East pipeline,” Nickarz said.


This study investigates the TPP’s environment chapter and finds, despite official assurances to the contrary, the protections afforded by the deal are weak and generally unenforceable. Far from being a milestone for environmental protection, the TPP does little to safeguard or promote a healthy environment.  More here.

RELATED: "Free Trade: Pathway to Prosperity - or Back Road to Corporatism?"