"In Hogs We Trust." Part 1V The environmental costs of intensive livestock operations.

Last October, just before the provincial government relaxed regulations to allow for many more hogs to be produced in this province, George Matheson, Chair of the industry group, “Manitoba Pork,” testified before a legislative committee.

In an astonishing display of corporate hype, Matheson seemed to think he could, with a single statement, obliterate years of solid scientific research, conducted in his own province.

“Hog manure is not getting into our rivers and lakes,” he declared. “The vast majority…about 85 per cent, is injected into the soil of farmland or immediately incorporated into the soil. This method of application essentially stops manure from running off the land. I cannot overemphasize this point. This means manure does not get into rivers and lakes. In fact, it is illegal for manure to leave a field.”

In her long career with the University of Winnipeg’s biology department, Dr. Eva Pip (below) has come to a dramatically different conclusion. After visiting more than 400 sites in Manitoba and publishing a series of meticulous, detailed studies, the veteran water quality expert has found, “The two land use categories with the highest nitrate concentrations bleeding into adjacent surface waters were urban sewage and livestock/poultry operations.”

Nitrates act as nutrients which promote the rapid growth of harmful and often poisonous algae. As Dr. Pip explains, “These mar beaches, overgrow submerged surfaces, clog filters and fishing nets, and foul drinking water with objectionable tastes, odours and toxins.
Local fish and invertebrate kills have occurred both in summer and under winter ice.”

Many big livestock operations, including hog “mega-barns,” have been operating in southern Manitoba for years. This doesn’t make sense to Dr. Pip. “Our provincial government was irresponsibly allowing barns where periodic flooding was very likely, even certain. Since floodwaters flow into Lake Winnipeg, and also to Lake Manitoba via the Portage Diversion, this means that waste affects a very large area, not just the immediately adjacent waters.” Epic flooding in the Red River Valley in 1997 washed a host of human-related contaminants into those lakes, including waste from hog lagoons.

A study Dr. Pip supervised in 2006, confirmed that three substances harmful to water quality “increased significantly during flooding.” They were, dissolved solids and different forms of the two main nutrients, nitrogen and phosphorous. And human and animal waste were also “major factors” directly affecting water quality near the shore at 90 sites she surveyed along the southern half of Lake Winnipeg. Communities of mollusks (snails and native freshwater mussels), considered important indicators of environmental health, were dwindling, and many are endangered. She recommended another look be taken at management policies affecting the lake, in order to “reduce further habitat decline.”

In 2012, she published another study showing even more clearly, just how baseless Matheson’s testimony was. For an entire ice-free season, she and one of her students took water samples both upstream and downstream of a small hog and poultry operation in southeastern Manitoba. The farm, complete with waste lagoons and fields where the waste was sprayed, was located between the Brokenhead River and one of its tributaries, Hazel Creek. The study detected significantly higher levels of several substances harmful to water quality in the downstream samples, compared to upstream. These included phosphorous, some nitrogen, solids and fecal coliform bacteria, which increased when it rained. “ The study suggested that environmental loading of livestock waste adversely altered natural stream water quality.” And it called for producers to spread manure “during drier weather conditions, to minimize the large-scale escape events.”

“Our study demonstrated unequivocally," explains Dr. Pip, "that manure was getting into those waterways from the spread fields after the manure had been spread, and not just small amounts either.”
The Brokenhead River flows into Lake Winnipeg, the subject of
another study published in 2012. Entitled, “The rapid eutrophication of Lake Winnipeg,” it was conducted by a team of researchers headed by another water quality expert, Dr. David Schindler of the University of Alberta (above). It concluded that toxic blue-green algae (cyanobacteria) “have nearly doubled in size in that lake since the mid 1990s,” thanks to rapid increases in phosphorous levels." (See graph.) 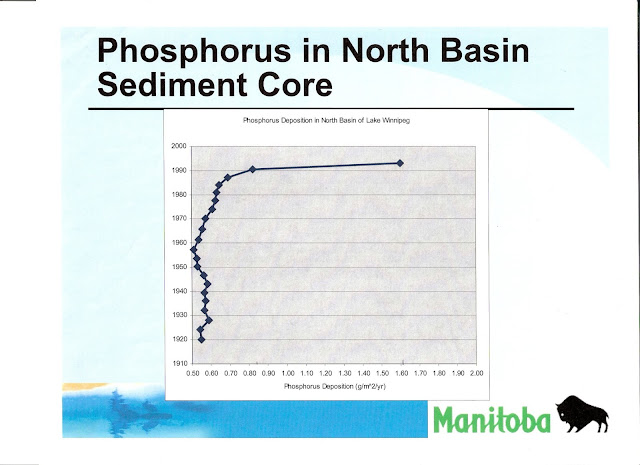 What is eutrophication? Harmful algal blooms, dead zones and fish kills are the results of a process called eutrophication, which begins with increased load of nutrients to estuaries and coastal waters. (A NOAA video.)

In 2007, Manitoba's Clean Environment Commission found that hog wastes spread on fields as a nutrient, “constitute the most serious environmental sustainability issues facing the industry.”
But, could human health be at risk here, too?

Further research by Dr. Pip less than four years ago, shows that indeed, it could be. It found a dangerous neurotoxin called BMAA at three places near the shore of Lake Winnipeg’s south basin. Levels of it were found to increase significantly after heavy “blooms” of the blue-green algae and when solids were suspended in the water. BMAA is found worldwide, wherever the algae are found. It has been linked to human ailments including Parkinson’s and ALS (Lou Gehrig’s disease). It has been found in the hair and brain tissue of Canadian Alzheimer’s patients.

There are several troubling pathways humans could be exposed to this toxin. These include consuming the milk or meat of livestock or waterfowl who’ve drunk tainted water in dugouts or wetlands, or even bathing in it! Of the three locations studied, the highest levels were found at Patricia Beach, a popular spot for bathers.

As bad as they sound, BMAA toxins are not the end of the story, as Dr. Pip explains. “We found other more important algal toxins in Lake Winnipeg (microcystins, anatoxins) that are much more immediate and potent, and these should be mentioned. We found that microcystins were related to phosphorus and nitrogen in the water. They can be inhaled, absorbed through skin, or ingested.

Despite all this, Premier Brian Pallister, like the industry, seems more than willing to simply write off all those years of collective scientific wisdom. When announcing last spring his government would relax important environmental regulations so thousands more hogs could be produced in Manitoba, he told reporters, “There’s no compelling evidence that any of these changes will put water at risk."
And, a report commissioned by the Government of Manitoba in 2011 concluded that phosphorous levels in the lake were “three times higher than they were in Lake Erie when that lake was described as dead!”

What about water quantity?

Quite apart from the role big hog operations play in harming the quality of our water, is the question of the volumes needed to water the livestock and clean the barns. The amounts are staggering. Figures on volumes already being consumed are hard to come by. But we are already getting a taste of what an expanded industry will look like. Applications are now pouring in for new barns and permission to expanded existing ones. The big pork processing company, HyLife alone, has applied to build no less than 16 big barns, housing some 50,000 hogs in the RM of Killarney, in the southwest. The company estimates all those barns, together, will require something like 48,000,000 imperial gallons per year! (218,212,320  litres!) The hogs will produce well over 31 million gallons of slurry, to be stored in several new earthen lagoons the company proposes to dig. The water will come from new wells. The barns are to be located in the Pembina River watershed and built on land which is currently in crop production.

While Canada is not at the top of the list of the many countries now threatened by water shortages, can we afford to ignore the warning signs? As the Guardian newspaper  reports, “Across the globe, huge areas are in crisis today as reservoirs and aquifers dry up.”

And almost everywhere, animal agriculture plays a role. As the Dutch-based “Water Footprint Network”puts it, “Animal products generally have a larger water footprint than crop products.” While cattle require the most water of all livestock, pigs still need almost six thousand (5,988) litres to produce a single kilogram of pork!

What about the stink?

But are the threats being posed by the Pallister government's crusade to expand the hog industry, confined to our waterways only? What about the stench produced by massive quantities of hog manure? The industry claims, expansion will do little to worsen that problem.

Yet odours from intensive livestock operations nationwide, have been recognized as a problem in Canada for well over 20 years. In its “Handbook on Health Impacts,” (2004), Health Canada notes, “Among all the animal production sectors, hog farming, given its constant growth since the 1970s and its expansion in many rural and even near-urban areas, is often publicly perceived as one of the most polluting agricultural activities. The number of complaints about odours from animal production operations has increased sharply since the 1970s, mainly because of the transition from solid (manure) to liquid (slurry) waste management. As a result, in 1995, odours from buildings and slurry storage facilities were 5.2 times stronger than they were in 1961; and odours from spreading activities were 8.2 times stronger.”

But hog barn odours can be more than just a nuisance. The Handbook warns that gases including ammonia, hydrogen sulphide and methane can not only irritate the eyes and upper respiratory tract, they can, in high enough concentrations, be lethal. “Half of all cases of severe manure gas poisoning are fatal,” it states. “And a few farm workers in Canada die from such poisoning each year,” usually while cleaning out confined spaces such as manure gutters below the barns.

Hard figures are not available. But it's believed, in Manitoba, more slurry is now injected directly into the ground, rather than being spread above-ground, as is being done here on farmland near Lake Erie, US in 2014.

Related:
"In Hogs We Trust."