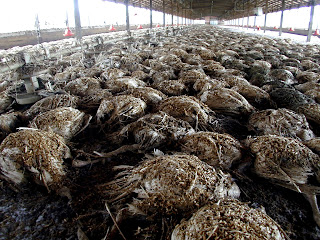 by Larry Powell Almost 750 thousand turkeys (shown here) and some 100 thousand hogs, were lost in catastrophic flooding in North Carolina during Hurricane Floyd in 1999.  Dave Gatley FEMA It's an all-too-familiar story. Given past history, chances are good that Florence will once again turn waterways in the Carolinas - home to hundreds of huge swine and poultry barns and waste lagoons, into a toxic mess of feces, urine and animal remains. It happened when Hurricane Floyd struck in 1999 and Mathew stormed in in 2016.  Even tho they were smaller storms than Florence is now, Mathew and Floyd left their marks, too. According to "The New Food Economy," 14 lagoons flooded and millions of animals died during Mathew. Environmental groups such as The Waterkeeper Alliance, documented what they called "fields of filth" left behind, as seen here.  Floyd's toll was also devastating. (See photo, above.) North Carolina's livestock produce more than
2 comments
Read more
More posts