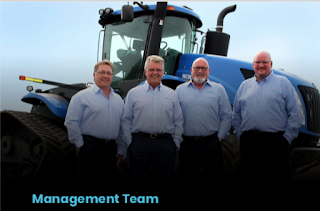 by Larry Powell Manitoba's  Premier, Brian Pallister has announced  another assistance package   to Hylife Foods of more than $11 m over the next several year.  (HyLife is now Canada's biggest pork processor.) Some $9.5m will come from the province, the rest from Ottawa. It will help the company pay for a pricey expansion of its killing plant in Neepawa and a new feed mill in the southwest. Last November, I warned in a blog-post here , that Manitoba taxpayers had better be prepared to "dig deeper." Why? Because Pallister's Conservatives had just begun to deregulate this province's corporate hog sector, so it could expand. And, expand, it has! Countless new barns are going up, so that millions more animals can be raised and slaughtered here: And all with fewer regulations than ever to control pollution, disease or catastrophic barn fires.  Given past history, my article reasoned, more "corporate welfare" was surely in the wind. It do
Post a comment
Read more
More posts