It's no secret that the now-infamous bug-killer, DDT,
persists stubbornly in the environment. Still, what scientists found in lake sediments they recently analyzed in the Atlantic province, 50 years after it was last used there, shocked them. The sediment in all five lakes they tested (representing numerous watersheds), were laced with DDT at levels up to 450 times beyond what would be considered safe for key aquatic species and even entire food webs.
by Larry Powell 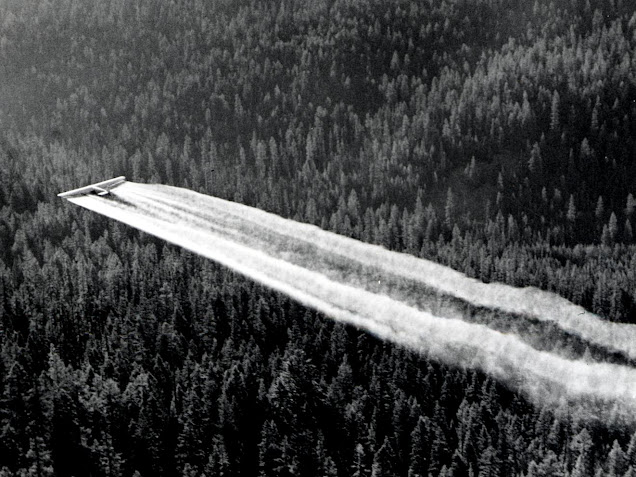 A plane sprays DDT on bud worms in Oregon, 1955.
Photo by Forest Health Protection.
But this latest research builds even further on what was known back then.

In the words of the researchers, "Surprisingly, DDT and its toxic breakdown products are still very high in modern sediments - above levels where harmful biological effects tend to occur."
Populations of a small water flea, Daphnia sp. (below) were found to have gone down significantly in the lakes tested. While such a creature may not sound impressive, it's considered an important invertebrate in the food webs of lakes.

Excessive growth of sometimes toxic algae can clog lakes, robbing them of their oxygen and killing fish. It has become a huge problem in waterways, worldwide.


Because New Brunswick had likely become the most heavily-sprayed forested region on the continent, DDT's harmful legacy could well be playing out well beyond the five lakes that were studied. (There are about 2,500 in the province, in all.)


Another co-author, Dr. Karen Kidd of McMaster University, adds a cautionary note of her own. "The lesson from our study is that pesticide use can result in persistent and permanent changes in aquatic environments."

The project was conducted by experts from three Canadian Universities; Mount Allison, New Brunswick and McMaster. Its findings were published today in the journal,Environmental Science & Technology. 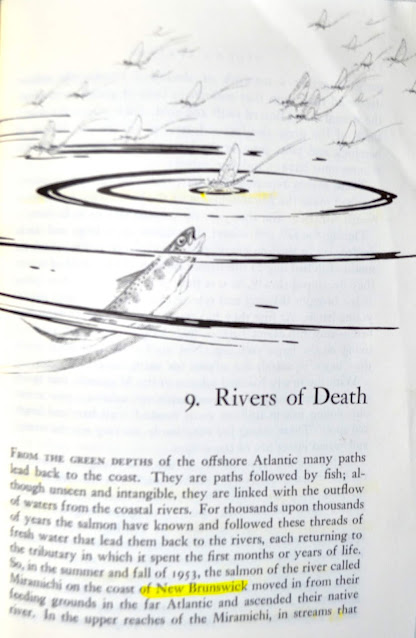 Rachel Carson's famous book, "Silent Spring," published in the early 60s, dedicates almost an entire chapter to the New Brunswick experience. Called "Rivers of Death," it documents the loss of countless fish, insects and birds along the Mirimachi River, one of North America's best salmon-fishing spots, in the wake of the spraying. She noted the pilots made no effort to avoid spraying directly over waterways. She also observed that the spraying was having questionable results, in any event, since the amounts applied kept having to be increased, just to keep ahead of the hungry worms.


Also, years ago, DDT was found to cause a thinning of the eggshells of dozens of bird species, leading to reproductive failure. While their numbers have since recovered, raptors, notably the bald eagle, were especially hard hit.

And, by killing the bugs eaten by insectivorous birds such as the swift (above), DDT has long been recognized as instrumental in widespread species declines, as well.
RELATED:
Email Post
Labels: Forests Pesticides