If you're a farmer who generously applies certain pesticides to your crops - losing your sense of smell has just taken on a whole new meaning. It could foreshadow health problems down the road. 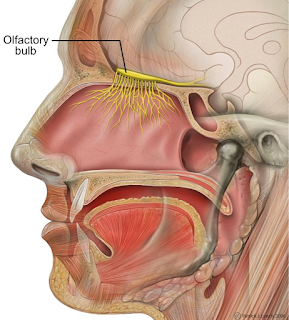 Decades of  research  - recently published - has found a significant link between a chronic loss of smell (olfactory impairment or "OI") among American farmers, and their high exposure to certain chemicals they applied to their fields. Far from being a minor ailment, "OI" has long been identified as one of the earliest and most important symptoms of several neurological diseases,  including Parkinson's and Alzheimer's. by Larry Powell The human "olfactory" system governs  our sense of smell. Image - public domain. Beginning in the '90s, a team of US scientists surveyed more than 11 thousand farmers from Iowa and North Carolina. They were asked about their experiences with farm chemicals during their lifetimes. In 2015, there was a follow-up survey. Almost 12 hundred (10.6%) reported they had either lost, or significantly lost, their sense of smell. And those who reported incidents of unusually high exposure to pesticides during
Post a comment
Read more
More posts