Despite long-standing and widespread warnings of the dangers, hog producers on the Canadian prairies were still feeding more antibiotics to their pigs in 2018 than they did the year before. (Latest figures available.)

In 2019, an elite panel of experts - The Council of Canadian Academies -  confirmed that thousands of Canadians were already dying each year of "antimicrobial resistance (AMR)." And, with that resistance still growing, up to 400 thousand will likely die of it by mid-century. It calls the problem, “a serious existential threat.”

And, if anyone needs more convincing, here's how Canada's own Chief Public Health Officer puts it.

"Left unchecked, there's risk of losing these medications as an essential life-saving treatment. It's estimated that antibiotic-resistant infections could cause 10 million deaths a year, globally by 2050. This is more than the current annual worldwide deaths from cancer."

AMR happens when too many antibiotics are given (when they're not needed), not only to people, but mostly to livestock (domestic animals raised for food), like cattle, pigs and poultry. (Almost 80% of antibiotics in Canada are used by the livestock sector.)

Producers use them, not only to fight disease in their herds and flocks, but to prevent disease and even promote growth (make their animals grow faster). (See chart, below.)

This has led to the development of "superbugs," in people who eat, not just the contaminated pork, but beef, poultry and eggs, as well. These are bacteria which have grown resistant or downright immune to the drugs which were once effective in treating them.

If more action isn't taken, it appears, the end result will be chilling. Health authorities predict, many human illnesses, including pneumonia, tuberculosis and syphilis, could become incurable.

A report released recently, is revealing.

In its latest 2018 annual report, the federal surveillance group, *CIPARS, states;  total quantities of antibiotics distributed for sale in Canadian livestock, increased about five percent over the previous year.

Yet total usage across the country, actually went down. (This is apparently due to a lag time between distribution and use.)

In Alberta, Saskatchewan and Manitoba, however, it was a different story. While inoculating less, producers fed more of these drugs to their herds in 2018 than the year before.

Over that same period, producers in Ontario and Quebec, by contrast, actually fed"significantly less."

It's not just how much - but what kind that matters, too!

Producers across the country, administered nineteen different antibiotics, considered important in the treatment of human infections, to their herds in 2018.

Among the most concerning seems to be ceftiofur. (See graph, below.) It's only used to treat animals, not humans. But, it's feared it could still pass resistance on to another very similar drug in the same class which is a human medication. For that reason, it falls into the category of "very high importance" for treating serious human infections. Few, if any alternatives to this class of drugs are available if they don't work.

Hog producers across the country (see chart, below), were still using antimicrobials more to prevent disease and promote growth than for actual treatment. 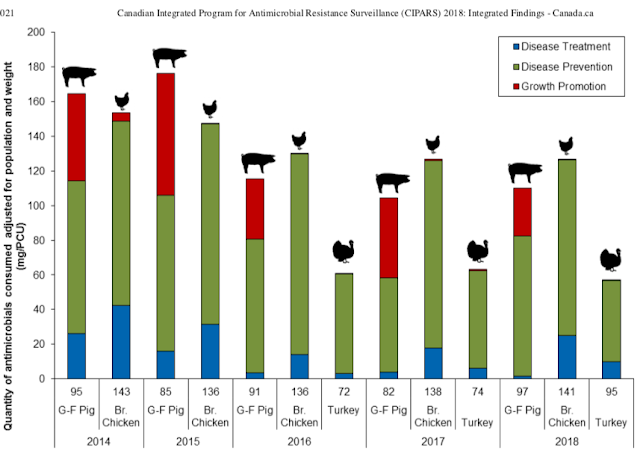 These practises run counter to pleas from groups including the World Health Organization. Sixteen years ago, the WHO saw the need to warn the world about the "human health consequences" of AMR. And it  issued guidelines on how to reduce unnecessary use.
Since then, some rules have been put in place in Canada. Since December of 2018, it has been illegal to give medically-important drugs to livestock without a prescription from a vet. Failing to do so would be an infraction under the Food and Drug Act. It's not believed there have been any prosecutions, so far. And it's too early to say whether the new rules have led to a reduction in use.

And the industry group representing hog producers nationally, the Canadian Pork Council, "strictly prohibits" its members from using drugs of highest importance in human medications, just to prevent disease or to promote growth.

Has the poultry sector set an example for others?

In 2014, Canada's poultry growers actually stopped giving drugs classified as being "very highly important" in human medicine, to their flocks. And, according to CIPARS, "This appears to reduce antimicrobial resistance in most scenarios." But the initiative was taken voluntarily by the poultry sector and does not apply to hogs.

CIPARS expects it'll be releasing its 2019 report soon. It also promises to streamline its operations in order to release its findings in a more timely manner.

By legislation, the Canadian Integrated Program for Antimicrobial Resistance Surveillance keeps track of trends in antibiotic usage and the degree to which resistances are developing. Run by the Public Health Agency of Canada, it also works to make sure that these medications, many critical to the health of both animals and humans, are preserved. It is independent of Health Canada.

Below is an email I sent to the group representing the hog industry in this province, asking for their input into my story. They have not responded.  l.p.

Will the de-regulation of Manitoba's hog industry contribute to a world health crisis?

Brent Bjorklund said…
Excellent information. I think you can see that progress is being made in non-hog livestock. Also some progress in Eastern Canada hog operations vrs Western Canada. This is likely the combined influence of Hylife, which is 100% foreign owned mega corporation from Asia dominating Manitoba hog industry and a Pallister conservative government.
The Quebec Co-operative model at least makes an effort to do the right thing and it benefits the farmers. Hylife knows its cheaper to pay off the politicians and media experts to spin lies then it is to change production methods. Hylife has dominant control of MB Pork and veto power with the Canadian Pork Council. The Canadian Pork Council receives 3 million per year of Taxpayers $ to promote hog exports mostly to Asia.
The industry contributes absolutely nothing in real terms to research on the environment, but dominates private contributions to U of M focusing research on production profitability.
January 31, 2021 at 1:18 PM