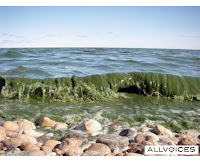 A unique pilot project at Netley-Libau Marsh, supported by $150,000 in provincial funding, will explore ways of preventing pollutants from getting into Lake Winnipeg while at the same time reducing greenhouse-gas emissions, Lk. Wpg. Greenpeace Photo Premier Greg Selinger announced today.


"In partnership with the International Institute for Sustainable Development (IISD) and the University of Manitoba, we are announcing funding to support the further development of a green,

bio-energy project which builds on actions we have already taken," said Selinger. "This is a made-in-Manitoba solution to help Lake Winnipeg by keeping pollutants out, while at the same time providing a green solution to offset coal use."
The project will see the harvest of about 200 hectares of marsh grasses.  Research has shown that pollutants, such as phosphorus, are stored in the marsh grass and, as part of the project, the
grass will be turned into a clean, bio-energy product.  This product can be used to burn green biomass and reduce the burning of coal. At the same time, the pollutants would not get into the water of the marsh or Lake Winnipeg.

"The results from this pilot project could become a critical part of efforts to reduce nutrients flowing into Lake Winnipeg," said Henry David Venema, International Institute for Sustainable Development's director of Sustainable Natural Resources Management and the Water Innovation Centre. "This Netley-Libau project is a practical example of the bio-economy concept and we are excited about the partnership and the opportunities it presents."

Once fully developed the project could:

· capture and recover approximately eight tonnes of phosphorus and remove 30 to 40 tonnes of nitrogen, the equivalent produced from the waste water of a town of 20,000 people.

"Netley-Libau is the largest coastal marsh on the continent and restoring and managing vegetation in the marsh is critical to the health of the marsh and Lake Winnipeg," said Dr. Gordon
Goldsborough, professor of biological sciences at the University of Manitoba.

Through the Sustainable Development Innovations Fund, the Manitoba government has provided approximately $100,000 to IISD over the past five years to support initial research of the Netley-Libau biomass harvest project.

Other support from or action by the Manitoba government to help reduce nutrients getting into Lake Winnipeg includes:

· passing the most comprehensive legislation in the country to protect surface and groundwater from the impacts of phosphorous;

· introducing the first-in-Canada ban on phosphates in dish detergent;

· instituting a moratorium on hog expansion in areas near Lake Winnipeg;

· instituting a major initiative to protect wetlands and riparian areas by providing incentives to farmers to protect these sensitive lands;

· funding for research, planning and work with inter-jurisdictional partners to help keep phosphorous out of Manitoba's watershed and help Lake Winnipeg.