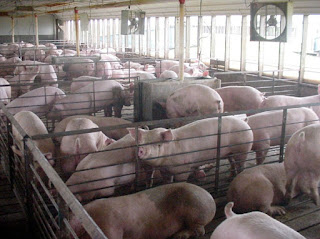 A confined animal feeding operation. "Unnecessary or incorrect antibiotic use in...agricultural production has worsened the problem." USGS photo.
Several times a week Brad Spellberg struggles with a difficult decision. A patient stumbles into his emergency room in southern California suffering from familiar symptoms: pressure when she urinates, pain in her side, fever and nausea. Based on these clues Spellberg can quickly diagnose the problem as a kidney infection, but the trouble lies in deciding what he should do next. He knows the patient is hurting and of course he wants to help, but more than his patient’s health hangs in the balance. Story here.
at 15:07


When the Manitoba Conservative government rolled out the welcome mat to the invasive hog Industry in
the mid 1990's, Premier Filmon always emphasized that there would be further "Value Added compliments
and benefits " to Manitobans. And he was right!
For the past 20 years amid the anger, frustrations and anxiety of rural residents this hog Industry,with the
blessings of provincial and municipal governments have built their huge hog producing factories nearly
anywhere that suited them.

This kind of intensive hog production impacts the quality of living for humans, causes air pollution-noxious odours,
toxic gases and drug pollution. As well, antibiotics, growth-enhancing chemicals and other veterinary drugs end up
in the animals themselves and enter the environment through their manure and urine, contaminating the water, the
soil and our food. Then of course there is the situation of manure itself. A hog complex will produce faeces equivalent
to the population of a small city.....all untreated and incorporated unto the land, eventually finding it's way into
water sources and Lake Winnipeg as the end designation.

But wait....now there is more..for in addition to causing immense animal suffering,factory farms are spawning
dangerous superbugs that current antibiotics are powerless against.
In May,2016, the Walter Reed Army Institute of Research reported the first U.S. case of Colistin-resistent infection,
involving a patient in Pennsylvania. Also that month,researchers at USDA and Health and Human Services reported
finding Colistin-resistant E.coli in a pig intestinal sample.
Because Colistin is a last resort drug for treating superbug (multi-drug resistant) infections, these discoveries signal we are
that much closer to what has been referred to as a post-antibiotic era, where people will die from once-treatable infections.

The question that needs to be addressed by our government is," Why are they allowing this Industry to continue raising
hogs in a fashion that endangers the very lives and well being of people"?

As verification and follow up, the United Nations has recognized
the seriousness of the situation and has become involved.
"UN meeting tackles the 'fundamental threat' of antibiotic resistant superbugs".
This is only the fourth time, since it's existence, the general assembly has held a
high level meeting for a health issue.
The dangers are real, and must not be ignored.
Governments must re-act accordingly to direct the hog industry.
This is not a time for complacency.