Are Hypocrites and Opportunists Taking Over Our Lives? 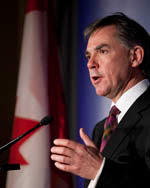 Dear Editor,   When a hollow m an like Jim Prentice can don a phony cloak of "green," take on a sacred trust as this nation's "Minister of the Environment," then hightail it off to a cushy job with "CIBC" (which is helping to bankroll the Alberta tar sands, the world's dirtiest energy project), be afraid. Be very afraid.   Jim Prentice, Climate Criminal    Dead ducks in an Albrta tar pit. (Vancouver Sun photo) As Prentice skulks off into the night with visions of money bags dancing in his head, he gets a pat on the back from Stephen Harper and a free pass from a polite media. Fish caught near tarpits - Jason Franson CP Preoccupied with political "process," "strategy" and "positioning," news outlets obviously no longer believe they have any duty to actually hold the ethical behaviour of our leaders up to any kind of public scrutiny. That would just be wrong! Instead, they pontificate on how the balance in t
Post a comment
Read more

- November 19, 2010
Winnipeg Free Press - By: Mike De Souza - 18/11/2010 Scrapped without Senate hearings, debate... =========== TAKE ACTION: Tell MPs and the Prime Minister to respect democracy and heed the will of Canadians Stephen Harper has done what he promised not... ========== LETTERS; Dear Editor: Re Unelected Tory senators kill climate bill passed by House , Gloria Galloway, Nov.17/2010 I am so shocked and ashamed, and disappointed by this callous political act, once again. This action by the Tory dominated Senate is the straw that broke the camel's back. The senators were undoubtedly following orders from the Tory leader who appointed them, even though he campaigned against such underhanded and devious tactics. Harper holds tyrannical control of his party, and the government whenever he can, and wields it in a condescending and undemocratic manner. Little by little he has eroded Canada's democratic government. But we Canadians just stand back and let him do it. Sometimes I w
1 comment
Read more
More posts