The UK Government has Abandoned its Sustainable Homes Policy - by Redefining Zero. 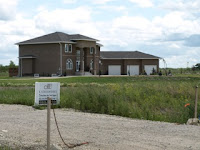 George Monbiot - the Guardian - Nov 26 '10 What does zero look like to you? Is it: ====== Still more large "conventional" homes go up in Winnipeg, Manitoba, CA with little thought given to their sustainability.  l.p. photos
Post a comment
Read more

November 26, 2010 - The Council of Canadians Please also read:  Blackfire mine shut down over environmental concerns  EDITOR'S NOTE: It's stories like this which remind me of one of the reasons I started this blog in the first place. Disgusting, rotten things go on in this world which too many mass media, including those in my own country, are too cowardly to even shine a light on. But the cowardice isn't limited to the media.  A bill in the House of Commons, designed to clamp down on Canadian-based mining companies who commit acts abroad similar to this one, was recently defeated. Some Honourable Members, representing mining constituencies, apparently afraid they would offend their voters if they supported it, stayed away when the vote was taken! Such courage! Such principle! l.p.
Post a comment
Read more
More posts