Canada's "Law and Order" Prime Minister (Letter to the Editor)

If you like my blog, please consider a donation. Thanks! Larry
Dear Editor,

If Stephen Harper is so keen on becoming a "law and order" Prime Minister, why does he seem to have so little regard for the law, himself? Since coming to power about six years ago, his government has been riddled with a litany of dirty tricks, domestic and international crimes.

The most recent is his scandalous decision to withdraw from the Kyoto Accord, a legally binding, international agreement to limit human emissions of greenhouse gases, which are causing catastrophic climate change. (Have you noticed Manitoba's tragic and terrible flooding lately?) 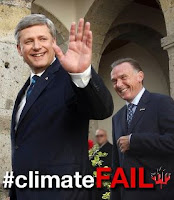 Even China put Canada to shame at the recent climate talks in Durban, showing a willingness to "step up" and show some environmental leadership while Harper showed none. His "operative" at the talks, Peter Kent (who I now refer to as our "Minister of Environmental Destruction"), once again proved, neither of them really works for you, me, our children or our planet, for that matter. Make no mistake, they are, quite simply, the handmaidens of the likes of Syncrude, Suncor, and other big, rich, powerful players in the Alberta tar sands, earth's largest energy project and quite likely its dirtiest.

His administration has been muzzling climate scientists since day one, threatening them with dismissal if they speak out about the gravity of the situation.

Then there was the court ruling which declared that the Harper government had broken the law in the way it is clumsily proceeding with the dismantling of the Canadian Wheat Board. It was just the most recent in a string of court decisions that ruled against the government on this matter. Rather than pausing to consider compromise or co-operation in the face of all of this, the Prime Minister is ruthlessly pressing ahead with a court appeal and a clamp down on democratic debate with heavy-handed measures like closure.

On top of this, there were the concerted efforts by Conservatives to subvert the Committee system in the Commons, as well as serious election fraud. (Remember the crafty "in and out" scheme to fund elections?) While some of the "dirty tricks" may not strictly speaking, be "crimes," it is the leader of a party and a government who sets the tone and creates the "culture" for what happens down the line.

It is against this backdrop that Harper is committing billions of our tax dollars to new prisons, fighter planes and warships, as if he has the moral authority to act as policeman to the world, let alone enforce tougher laws on we ordinary Canadians.

And we wonder why there's an "Occupy Movement!"

Perhaps some space needs to be reserved in Harper's shiny new "slammers" for himself and his accomplices, er, I mean, cabinet ministers, for all the crimes they are committing against us!

PLT: Dr. Hansen is one of those rare birds - a scientist/activist! Here, he is shown being arrested at demonstrations at the White House, protesting against the Keystone XL pipeline. We need more like him!
at December 11, 2011 No comments:

DURBAN, South Africa (AP) — A U.N. climate conference reached a hard-fought agreement Sunday on a complex and far-reaching program meant to set a new course for the global fight against climate change for the coming decades. Details here.
======
PLT: Canada continues playing its role as a dinosaur, leading us further into world isolation as a climate criminal. Even China has showed more leadership there than we did! Shame!
at December 11, 2011 No comments: