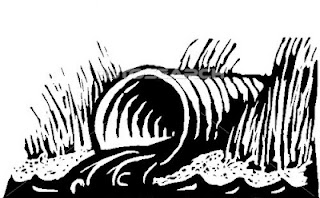 Government of Manitoba Manitoba Conservation and Water Stewardship advises charges have been laid against the City of Winnipeg under the Environment Act as a result of the city’s South End Water Pollution Control Centre releasing a large amount of partially treated sewage into the Red River over a prolonged period of time.  Details here.
Post a comment
Read more 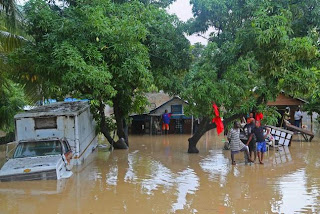 New York Times: Hurricane Sandy, now battering the Bahamas, is expected to head up the East Coast over the weekend and possibly collide with a winter blast, producing what weather forecasters fear could be a historic and potentially devastating storm for a large swath of the Northeast and mid-Atlantic early next week. Details here. CARL JUSTE / TRIBUNE MEDIA / MCT Residents find higher ground as the water level continues to rise in Leogane, Haiti, Friday. Leogane has endured five consecutive days of rain due to the aftermath of Hurricane Sandy. PLT: The deafening silence emanating from the US campaign trail about climate change can only be further evidence of the disconnect between politicians and power on the one hand, and reality and science on the other. How many "Frankenstorms" will we have to endure before they remove their heads from their a...., er I mean, the sand and start telling it like it is? Please also read: "IT'S GLOBAL WARMING, STUPID!"
Post a comment
Read more

Manitoba Co-Operator - Commodity News Service Canada A healthy canola field. PLT photo  Canadian canola exports during the 2012-13 crop year were expected to come in at a record-high level -- but smaller-than-anticipated production is now predicted to dim those prospects. Full story here. PLT: Crop production stories, chalk-full of numbers such as this one, are both important and interesting, I'm sure. But, as a consumer with an environmental conscience, I am frequently disappointed at the lack of context in such stories in the overall scheme of things. For example, in my own rural area, coffee-talk is rife with reports of a rare canola disease this year which, I am told, is a fungus spread by an insect which thrives in warm weather. That bug was apparently carried from the south where record heat and drought enabled it to thrive. I THINK the disease is called Aster Yellows (Phytoplasma) (l).  It was, this year, worse than it has ever been and shattered the hopes many fa
Post a comment
Read more
More posts