Climate change: How a Warming World is a Threat to our Food Supplies 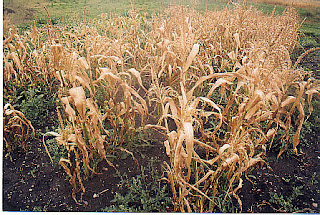 Global warming is exacerbating political instability as tensions brought on by food insecurity rise. With research suggesting the issue can only get worse we examine the risks around the world. Details here.


PLT: As a Canadian, I'm getting quite tired of coverage such as this, concentrating on the US as centre of the universe, then radiating outward in any direction except Canada! The only reference I can find in this entire article to my country is this: "Canada will be a winner, as crops move north." Say what?
I've lived most of my 70+ years on the Canadian prairies & the only crop "moving north" that I'm aware of is a rare disease of canola, purportedly carried north on the wind and thriving due to drought. (Kuz we had drought here, too, last summer!)
As I look out my window this mid-April day, I see mounds of snow with more forecast. And I hear on the radio of highways turned into skating rinks, cars in ditches and schools closed, yet again. Much more snow is falling on Winnipeg and North Dakota as we speak, where serious flooding is again a virtual certainty. When North Dakota floods, we flood, thanks to the Red River which flows from them to us. Floods of epic proportions already ravaged my province (Manitoba) in '97, '09, '11 & '12 (plus slightly less serious ones in between). Cabins on lakeshores, millions of dollars worth of municipal infrastructure such as roads and bridges were destroyed. People were displaced with many still waiting to return, two years after the event. Millions of hectares of cropland either went unseeded then, or seeded crops were drowned. As of now; we don't really know when farmers will be getting on the land this spring, or whether they'll be able to get a crop in, at all!
Blizzards are an everyday occurrence somewhere in this vast region of Canada, it now seems. Record cold has been the "norm" all winter, with temperatures (both maxes & mins), frequently running 10 to 15 degrees Celsius below normal.
I'm still a staunch supporter of the science of climate change. Still, I'm growing increasingly puzzled as to how this record cold winter fits into the scenario of global warming. Meanwhile, I'm still watching and waiting for more detailed, scientific analysis of what is happening in the US, Africa and Asia, for sure, but also in my neck-of-the woods, too, if you please! Having read the above article, I guess I'll just have to keep looking!
Email Post
Labels: Climate Change? Environmental Food