Dear Larry, New  Ecojustice research confirms  that upgrading oil extracted from  Alberta’s oilsands is indeed a nasty bit of business that puts waterways,  fish and people at risk. The burning and combustion required to transform raw bitumen into  synthetic crude oil comes at a heavy cost: the release of airborne  pollutants — some of which have been found to cause cancer in humans  and impact the development and survival of fish.  Our research shows that these toxic substances are making their way into  the Athabasca River, contaminating a waterway that holds ecological,  cultural and commercial significance for the people who live along its  shores. The river is also a vital life source for many wildlife species; it is  home to more than half of the province’s fish species. Learn more about Ecojustice’s research here But that’s just part of the story. Because even though the oilsands are one  of the biggest industrial projects on the planet, the federal
Post a comment
Read more

While Canada Drags its Feet, US and Russia Unite in Bid to Strengthen Polar Bear Protection 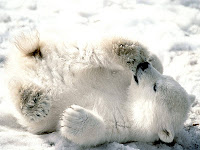 the guardian Proposal to ban international commercial trade in polar bear products sets up showdown with Canada over a key vote. Full story here. PLT: Once again, the "regressive Conservatism" of the Harperites rears its ugly head. When, oh when will we be rid of them?
Post a comment
Read more
More posts