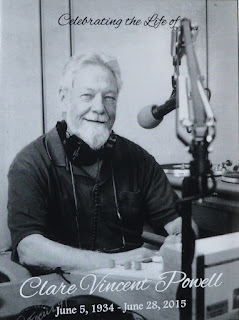 Eulogy by family, below.

During his long and meaningful time here on Earth, Clare came to mean many things to many people. His life embraced family, journalism, broadcasting, activism, trade unionism and a dash of politics.

Clare’s grandmother, Addy Gardner - a midwife, brought Clare into the world in her little house in Deepdale, Manitoba in 1934. The home doubled as the Deepdale Post Office, giving a whole new meaning to the term, “special delivery.” 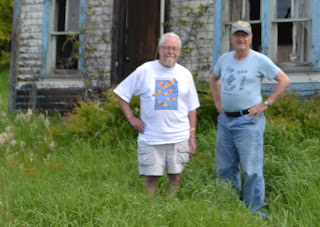 Clare and his brother Larry pose in front of their
birth-house in Deepdale,  now crumbling into disrepair. 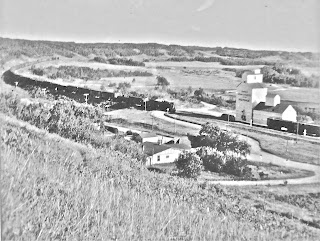 A steam train rumbles into Deepdale in the early days (circa 1955.)
Clare grew up on the small, family farm near Deepdale, where he and Larry helped their parents make it through some tough post-depression years.

After graduating from Grade 12, Clare worked for four radio stations in Manitoba and was part owner of a weekly newspaper in Lanigan, Saskatchewan.

Shocked but perhaps not that surprised.

Clare resisted suggestions which might have helped improve his health and living conditions. He lived and died in his own home, the way he obviously wanted it. With increasing degrees of difficulty, he got his own groceries and made meals, not just for himself  but often for family or friends who came to visit. (His barbequed chicken was always delicious!) He tended to his garden as best he could, and watched his beloved Blue Jays faithfully on TV.  Mercifully, the Jays were "on a tear" when he died!

No seniors home or emergency wards for Clare. “I did it my way,” might have been a fitting theme song for him.

While being stubborn and opinionated may have sometimes tried the patience of those around Clare, it also served him well in his role as a “thorn in the side” of the establishment.

He once ruffled the stern decorum of city council chambers. After listening to an apologist for the chemical industry oppose a plan to ban cosmetic pesticides, Clare shouted from the gallery, “Don’t forget to pick up your cheque from Monsanto on your way out!”

Many years ago, he actually left a good job with the government as a protest over Allan Blakeney’s wage and price controls and his pro-nuclear policies.  The fact Clare did not have another job to go to, did not deter him.

His brother Larry once remarked, “Clare has more integrity in his little finger than most of us have in our entire bodies!”

And Clare was used to, but never deterred by failure. He backed several people running for party leaderships who did not make it. He frequently defied the “old boys club” by supporting female candidates.

He also knew which side he was on in an issue which split the labour movement for years. He had no time for a political party which, while in opposition, claimed to support working people but, once elected, acted quite differently.

His daughter Sherri remembers her dad as “One of the cheapest people you would ever meet – when it came to himself.” No new clothes when used ones would do. “But, when it came to others, he was among the most generous.”

His list of progressive causes he supported financially for years, was long and diverse. It ranged from “The Suzuki Foundation” to “Clean, Green Regina” to “Briarpatch,” an alternative magazine which has, for years, championed the rights of the poor, the downtrodden and minorities. He devoted an amazing four decades of his life to Briarpatch, serving there as a writer, editor, board member and envelope-stuffer.

Clare served for years as a volunteer disc-jockey with Regina’s community radio station, CJTR, retiring about a year ago. He loved a wide variety of music, as reflected in the name of his show, Eclectic Café and in his huge collection of CDs, which he bought himself. He used to joke, “If you don’t like this song, stick around. You’re sure to like the next one better!”

Clare’s family would like to especially thank his cousin Barrie Rink,  his friends Don and Carol Anderson and Ingrid Alesych for their selfless help on that fateful and very stressful day we learned of his death.

And a parting word of thanks should also go to Barb Byers and Pat Gorius…..just for being Clare’s friends!

If Clare is in Heaven now – and, if agnostics can go to heaven - we can only imagine what he’d be up to - possibly helping the angels win better wages and working conditions!

The family plans to hold a "celebration of life" for Clare in Regina later this summer (a party), at a place and date to be announced. There'll be lots of music and personal tributes.
at July 04, 2015

Email ThisBlogThis!Share to TwitterShare to FacebookShare to Pinterest
Labels: Death of a Fighter

Larry & Rowena. We offer our deepest and most respectful condolences.

I believe one would have had to be very, very right-wing politically not to respect a man like Clare. I know you definitely didn't have to completely agree with him politically to like him as a friend...or love him as a brother-in-law. His sudden passing leaves a hole in our lives which can never be filled by another person...but memories of him will help to fill the void. Our deepest sympathy to you and your family Larry.

Thanks for the kind words, Edna. They mean a lot.