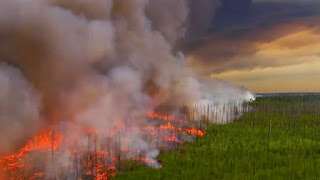 Photo credit - APTN. (A version of this letter was published yesterday in the Neepawa Press.)
Dear Editor,
I'm afraid there's been a misunderstanding.
My recent letter in the Neepawa Press, "It's time to wake up and smell the smoke," has brought quite a negative response from friends and others.
The misunderstanding is over the "link" that I drew between wildfires and manmade climate change. My critics apparently think such a link was my own creation! Nothing could be further from the truth! I was merely the messenger!

My letter warns that the greenhouse gases we are producing by burning oil, gas and coal, are leading to more frequent and severe droughts (which, in turn lead to wildfires that are also more frequent and severe). But that is precisely what the leading authorities on the topic, including the Intergovernmental Panel on Climate Change (IPCC), have been saying for years. And, official records continue to prove that those predictions are correct!
Also, some apparently thought I was suggesting that "manmade climate change" meant that every single wildfire has been started directly by a human with a match, lighter or campfire! Far from it. More epic heatwaves and drought - hallmarks of climate change - are turning forests into kindling, ready to explode into flames, whether the source of ignition is a human with a match, the hot exhaust of a quad, or lightning.
My critics also seem to think I am ignoring the accepted, widely-acknowledged benefits which forest fires can bring - the renewal of new growth and the return of nutrients to the soil. Not at all. But surely those benefits are now being outweighed by the increasing severity of modern wildfires in many parts of the world. They're starting earlier, spreading faster, causing way more damage, claiming the lives of more brave firefighters, destroying more houses and forcing thousands more humans from their homes than used to be the case!
Since my last letter, raging wildfires of epic proportions have plagued northern California, displacing as many people as was the case in Saskatchewan earlier this summer (13 thousand). The California blazes confounded veteran firefighters, who had never seen anything like them. Similar fires are now erupting in Arizona, Washington State, Portugal and Spain.
So, disagree with me, if you will.  Just let it be known that, by so doing, you are also disagreeing with the accumulated wisdom (and virtually complete consensus) of our top, renowned climatologists the world over; Not to mention the World Council of Churches, the Governor of California, the Premiers of BC and Ontario, the US Military, the World Bank, the US Department of Energy, Natural Resources Canada, President Obama and now, the Pope.

As for the suggestion that I, myself contribute to global warming (which I've heard before), I plead "guilty as charged." All humans leave a carbon footprint. The best I can do is to try to keep mine small. So I drive a car which gets 45 miles per gallon and travel as much as I can by train, which is less damaging than air travel.
My biggest regret is that my previous "provocatively-worded" letter upset some friends. But it was that way for a reason.

In my experience, the "low-key" kind get no response at all. As a science writer, I spent weeks researching an in-depth, illustrated, fact-based article earlier this year, quoting scientific experts from the International Boreal Forest Research Association. The title said it all: "Only Heroic Efforts Will Spare Earth's Mighty Boreal Forest From the Worst Ravages of Climate Change - Experts." No opinionated or provocative statements by me - just the facts!

Scant weeks later, this year's disastrous wildfire season was raging in Canada, earlier than usual and worse than usual - a scenario predicted, in detail in my story.

So, as our planet continues to be dangerously degraded by our current human behaviour, remaining silent (or even "low-key") is not an option for me.

Climate activists should focus on public health to inspire action. "I know the forest fires are having an impact on my asthma. It's the frequency with which I take my medicine. You don't think about the impact of climate change on yourself and your life." - Julie Davenport, Vernon, British Columbia
Listen here.
Email Post
Labels: Climate Change? Wildlife