- June 02, 2015
ClimateProgress A searing and continuing heat wave in India has so far killed more than 2,300 people , making it the 5th deadliest in recorded world history. Story here.
Post a comment
Read more 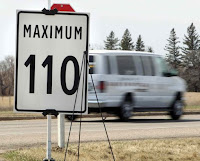 by Larry Powell In an age when the ravages of climate change are making themselves increasingly evident, the Government of Manitoba has raised the speed limit on most of the Trans Canada west of Winnipeg, to 110 KPH.  Have the poor souls flunked out of "Climate Change 101?" If they hadn't, they would surely know that higher speeds will only result in more fuel consumption, something an enlightened government should be trying to avoid. (Every 9th grader now knows, or sure as Hell should, that our now out-of-control burning of fossil fuel is what is driving the climate crisis we are now all faced with.) On its website, Natural Resources Canada has a simple warning:   "Avoid high speeds. Most cars, vans, SUVs and pick-up trucks operate most fuel efficiently when travelling between 50 and 80 km/h. Above this optimal speed zone, vehicles consume increasingly more fuel the faster they go."  Obviously the expediting of human traffic and cargo is more impo
1 comment
Read more

- June 02, 2015
Common Dreams 'All draft treaty texts should be published so that Parliamentarians and civil society have sufficient time to review them and to weigh the pros and cons in a democratic manner,' say officials. Story here. Related:   Free Trade: Pathway to Prosperity - or Back Road to Corporatism?
Post a comment
Read more
More posts