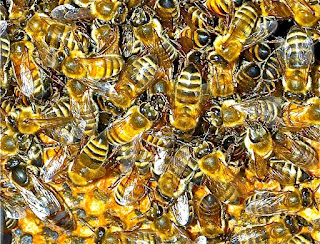 The New York Times PinP photo More than 70 percent of pollen and honey samples collected from foraging bees in Massachusetts contained neonicotinoids, a type of insecticide that has been linked to colony collapse disorder, researchers are reporting. Story here.
1 comment
Read more

by Larry Powell For simplicity, I'm putting the series of events discussed below, in chronological order. First, I wrote the letter, immediately below,   published in the Brandon Sun, Neepawa Press and Roblin Review in recent weeks. ===== Forest fire smoke (from as far away as BC) over southern Manitoba.  PinP  photo. Dear Editor,  It's time to wake up and smell the smoke! As wildfires rage around us on the Canadian prairies, forcing thousands of poor souls from their homes, we click our tongues and complain about sore eyes and reduced visibility on the roads. (Trust me, reduced visibility is the least of our worries.)   We apparently lack the brain power to listen to and actually  hear  what the world's scientific community has been warning us about for over a generation. If we do nothing to curb our insatiable appetite for fossil fuels, we can expect more and worse heatwaves, droughts, wildfires and a host of other extreme weather events whic
1 comment
Read more
More posts