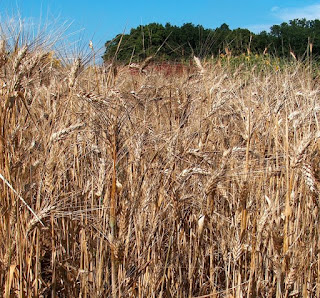 The Canadian Food Inspection Agency (CFIA) has detected the weedkiller glyphosate in almost thirty percent (29.7%) of food products it tested over the past two years.
A field of durum wheat. (Wikimedia Commons)
The foods were; fresh and processed fruits and vegetables, grains, beverages, beans, peas, lentils, soy beans and children’s food. While small amounts were found in all of the food groups tested, the CFIA concludes, levels were only high enough to be of concern to human health in 1.3 percent, overall. The grain tested (wheat and barley), had more Glyphosate above the acceptable standard (3.9%)  than any other food group.

The agency says, where levels were unacceptable, it has taken action by notifying the manufacturer or importer, requested corrective action, conducted further sampling or recalled products. It did not specify.

A pie chart displayed on the agency’s website shows that most of the sample in all food categories, contained no detectable levels, at all.

Glyphosate is the most widely-used herbicide in the world, sold largely under the brand name, Roundup. While its findings have since been challenged, a branch of the World Health Organization has concluded the product “probably causes cancer in humans.”
at April 14, 2017