Dear Larry -
We just witnessed history.
Yesterday’s BC election was a MAJOR breakthrough for Greens. The BC Green Party have re-elected their leader, Andrew Weaver, as well as two new MLAs. Sonia Furstenau has won in Cowichan Valley, and Adam Olsen has won in Saanich North and the Islands.

Perhaps most importantly, as it stands right now, the Greens hold the balance of power. That means that the Liberals or the NDP will need to work with the Green caucus in order to pass legislation. This is great news for British Columbians across the province.
The BC Greens stood up against pipelines, banned big money (they literally turned down corporate and union donations), and fought for better education, childcare, and housing. Now, citizens across Canada are going to see what those principled stances will look like in the Legislature, with a powerful Green caucus behind them.
Join us in congratulating the BC Greens on a hard-fought and well-earned election success!
This is the result of giving British Columbians a chance to vote for something they believe in, rather than against what they don’t want. Now the BC Greens can fight for strong climate action and proportional representation in the Legislature. This is what doing politics differently looks like. 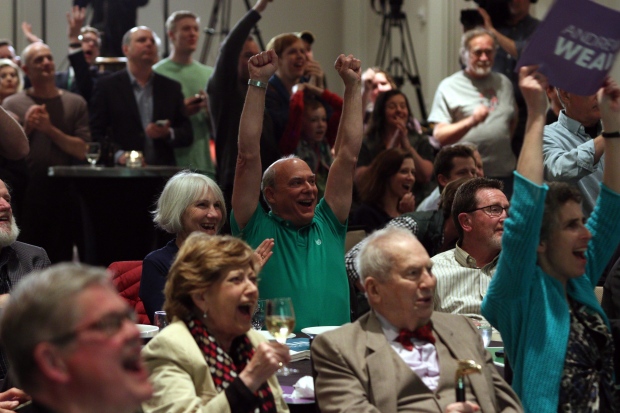 Prior to this election, Greens had won provincial seats in BC, New Brunswick, and PEI, all since Elizabeth May broke through with our federal party back in 2011. Now that Andrew Weaver and the BC Greens hold the balance of power in BC, we are poised to gain major strides federally in 2019.
Let’s support the BC Greens by offering our congratulations.
Emily
Emily McMillan
Executive Director
Green Party of Canada
Email Post
Labels: Politics Victory!